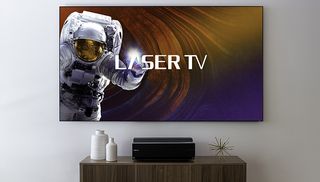 Bigger is better, right? Well, if not better, then certainly newsworthy as Hisense's 100in "4K Ultra HD Smart Laser TV" is finally on sale. Except it's not a television, it's a projector.

Confusing, we know; but misnomers notwithstanding, it's an interesting bit of kit. We first saw it last year during the 2016 IFA show in Berlin: an extremely short-throw projector with a claimed 3,000 lumens output and 20,000 hours of bulb life.

But the 100in, 4K image is only part of the picture, pardon the pun. This Hisense package also includes audio hardware from Harmon Kardon. The system has five speakers - including front channels that can combine to create a monster centre speaker - as well as a 16.5cm wireless subwoofer for the bass.

Unfortunately, it's only available in the US for now, but fingers crossed it makes its way across the pond soon.

From CRT to VHS: the tech that got left behind

The What Hi-Fi? guide(s) to the best films and TV shows to test your system