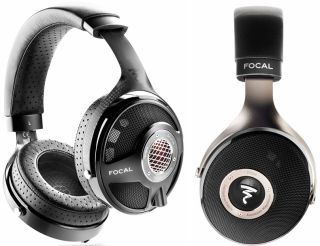 The Focal Utopia over-ears are the flagship model and are said to offer superior dynamics, clarity, neutrality and realism.

They’re also the world’s first "audiophile headphones” to come with fully open-backed full-range speaker drivers with Beryllium ‘M’-shaped domes, which have been four years in the making. They are redesigned versions of the Beryllium drivers found in the company’s high-end Utopia loudspeakers.

The voice coil within the Utopia headphones has also had a redesign. The new one is the first to be used without a former and also has a monolayer coating to make it even lighter. The new voice coil is 25mm in diameter and lighter than many of those used in other high-end headphones, Focal claims.

With an impedance of 80 ohms and a sensitivity of 104dB, they should be easier to drive than some other high-end headphones. They should also be comfortable thanks to a lambskin leather headband and ear cushions.

They’re due to be released in September/October for £3250.

The Elear and the Utopia both come supplied with a four metre OFC cable and 6.35mm stereo plug connector.

The Elear over-ears will be available from late September/early October for £800.

Third in the new line-up are the Listen headphones, which come in at the more affordable end of the market at £150. Focal says memory foam ear cushions provide high levels of noise isolation and that the headband design has been inspired by the one used on the Utopia and Elear to keep a consistent shape.

Within the earcups you’ll find 40mm drivers that feature Mylar cones and a titanium coating on the dome, to provide optimal rigidity.

Being portable headphones, the Listen can be folded away and stored in the supplied carry case and the one-button in-line microphone can be used to control music playback and answer phone calls. They’ll be available from September/October this year.