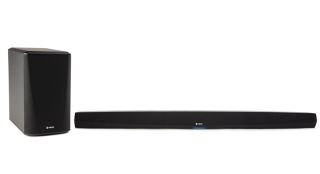 Denon's latest foray into the home cinema arena comes in the form of the HEOS HomeCinema HS2 - a 4K-compatible soundbar and subwoofer pairing, packed full of features.

Let's start with the physicalities: this soundbar comes with two 5x13cm drivers to handle upper bass and midrange, while a pair of 20mm dome tweeters handle the high frequencies.

We don't yet know the size of the driver in the sub, nor the power driving it, but we'll update once we get the information.

With regard to features, near the top of the list is connectivity for AirPlay and Bluetooth - so you can wirelessly stream music to it. It's also capable of supporting hi-res audio, via FLAC, ALAC, AIFF and DSD files.

But for those with Amazon Alexa devices (and the respective HEOS Home Entertainment skill), streaming music is faster and easier using your voice - and the soundbar will support Amazon's voice assistant. That function isn't available until the summer, unfortunately, but we look forward to playing with it when it is released.

Since it's a HEOS device, it'll also work wirelessly with all other HEOS speakers, including the HEOS 1 and HEOS 7.

The HEOS HomeCinema HS2 is available now, priced at £700.