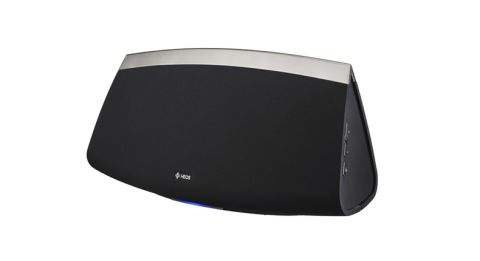 These days, companies are trying to outdo each other with the technological equivalent of reinventing the wheel: adding eye-catching new features to their products simply as a way of attracting headlines.

For our part, we prefer it when they stick to the basics and produce something that’s intuitive, simple to use and, as is not always the case of wireless speakers, has a good approach to sound.

So Denon has made the HEOS 7 HS2. It’s not the flashiest of products, nor is it the most expensive. Instead it’s a winningly sturdy speaker with the sort of well-rounded performance you’ll be happy to listen to for years.

There’s no faulting the HEOS 7 for build quality. It feels well made and the surfaces are clutter-free. Volume controls are found on the raindrop-shaped right-hand side, a headphone jack on the left.

On the back there's a range of connections for getting at music: an ethernet jack for a more stable connection than your wi-fi connection, a USB Type A connection that supports 24bit/192kHz hi-res files, and a 3.5mm aux input.

Your music is delivered by two tweeters and two mid-bass drivers, while the bottom end is handled by a modest subwoofer and two passive radiators – all of which are powered by five Class D amplifiers.

There’s also a Bluetooth button for pairing wirelessly, which has taken the place of the ‘reset’ button on the original version. It doesn’t have the aptX codec required for ‘CD-like’ 16bit/44.1kHz streaming some of its rivals offer, though.

The ‘Connect’ button on the back of this speaker is for linking to your wi-fi network.

This is done through the HEOS app, available on iOS, Android, and Fire devices - it requires you either plug an ethernet cable into the speaker or connect it physically to your phone via its 3.5mm headphone jack.

Flashing colour-coded LEDs at the bottom of the HEOS 7 show its current status – green during set-up, blue for a secure connection.

Once set up, you can stream a planet of music through Amazon Music, Tidal, Deezer, Napster, SoundCloud, Spotify and TuneIn radio – all controlled through the HEOS app (apart from Spotify, which works via Spotify Connect).

The HEOS 7 can easily be connected to a music server - it discovers our Naim server within a few seconds. Smart-home supporters will also be pleased to know an Alexa skill, which will lets you switch source by voice command, is coming later in the year.

Using the HEOS app is commendably simple. There are three tabs at the bottom – dividing the app into ‘products’, ‘sources’ and ‘playback’ sections for quick access – and overall it’s a slick, responsive experience that’s better than a lot of apps from rival companies (including Audio Pro and Bose). You can also connect to other HEOS products to create a multi-room system.

The only slight downside is the Settings panel, which lets you adjust the EQ, is located within the Music section.

This means that if you are deep into the embedded Deezer app, for example, and want to change the HEOS 7’s settings you have to tap all the way out. It would be nicer if it was a little more accessible, but it’s not a huge issue.

We would recommend playing with the EQ settings and making adjustments to suit your room.

This is a speaker that comes into its own in a big space, easily filling our medium-sized testing room with a weighty, authoritative sound - in smaller areas, the bass enthusiasm of the HEOS 7 could be a little overpowering.

After running it in over a few days, we start off by playing I am the Doctor by Murray Gold, and the way the mighty bass cuts underneath the rest of the orchestra has a commendable heft to it.

Managing that bass without loosening the grip on the high-pitched strings, the choral harmonies and rapidly plucked guitar sounds is a difficult feat, but one that the HEOS 7 does well enough.

Each element is kept in check, and yet is presented with cohesion and balance.

Those vocalisations, and the way they rise up midway through the score, are handled effortlessly, with enough attention to detail paid to discern how the multiple voices mesh together.

We swap to something a bit more pop (Green Light by Lorde), and as the track builds to the chorus the dynamic shift is smooth, and with adequate distinction between the quiet and the loud.

With the amount of modulation and reverb on the synths and guitars that end the song, a less forgiving speaker might descend into a little harshness – but not the HEOS 7.

It smoothes off the edges and sharp spikes, so you’ll be able to listen to even the most challenging tracks without alarms.

We're often to be found examining detail levels by breaking out Vampire Weekend’s Diane Young. It's a track with a mix of low voices, deep slapping drums, a thin, whining brass thread and Ezra Koenig’s lyrics.

The Denon handles them all confidently, providing enough texture and insight to make them all sound authentic and lively.

There are some areas in which it could improve, though. It lacks some rhythmic precision and dynamic subtlety, which means the rising tension in Murray Gold’s scores, and the quick changes in intensity as the song reaches its peak, are underplayed somewhat.

Nevertheless, the HEOS 7 ticks a great number of boxes. It sounds good with a variety of music through a range of sources, has a no-fuss aesthetic that should fit into a number of homes, and is easy to use.

Its smooth, safe character might not be the most exciting, but it could possibly keep you satisfied for a long time.