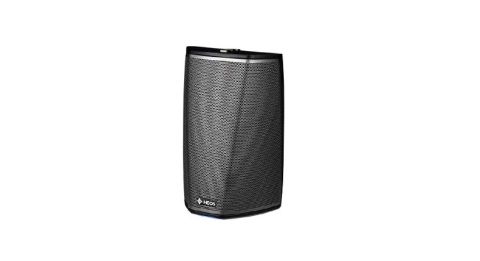 Easy to use and listen to, the HEOS 1 is a good go-to wireless speaker

"One is the loneliest number that you’ll ever do", according to 1960s rock band Three Dog Night. But that’s not the case for the Denon HEOS 1.

With its ability to connect to any other HEOS product – including amplifiers, receivers, soundbars, subwoofers and other wireless speakers – this speaker is far from Billy No-Mates.

And those looking for an upgrade to their kit, or a new modestly priced wireless speaker, will find the HEOS 1 puts on a good show all by its lonesome.

Although part of the HEOS line, place the HEOS 1 next to its larger HEOS 7 sibling and you’d be forgiven for thinking they were made by different manufacturers.

While the HEOS 7 is an angular, wide device, the HEOS 1 is a much smaller affair – about the size of a brick, but only half as heavy.

It sits upright, with volume controls and a mute button on the top. It is IPX4-rated, meaning that while accidental splashes from the shower won’t kill it, dropping it in the sink might.

An optional £80 battery base, called ‘GoPack’, also makes the HEOS 1 portable – it can provide up to six hours of music from the rechargeable stand.

There’s an ethernet connection for internet, an aux input, a USB type A socket that can be used for hi-res music playback up to 24bit/192kHz, and two buttons to pair the speaker via Bluetooth or your wi-fi network.

Connecting the speaker to your wireless network isn’t as smooth as we’d like, though. If you don’t want to use a network cable, you need to plug a 3.5mm audio cable into your device’s headphone jack to connect your smartphone or tablet to the speaker.

With many premium smartphones already ditching the headphone jack (in our test, a USB-C to 3.5mm adapter doesn't work, while Apple’s Lightning adapter does) this can make set-up more complex than it should be.

But once set up, using the speaker is straightforward. Download the HEOS control app from Apple, Google or Amazon’s app stores and pair your speaker to your wireless network to play music.

Tidal, Deezer, Napster, Amazon Music, SoundCloud, Spotify and TuneIn radio are all compatible, and it can also play tracks found on your local music server.

All of those streaming services are controlled through the HEOS app (apart from Spotify, which will bump you into its own app so you can use Spotify Connect).

This is now the (Spotify-directed) norm for streaming speakers, although Sonos still incorporates Spotify search and control in its own app.

Getting to grips with the app is simple, and it is better laid out than many other competing apps – including those from companies such as Bose.

There are three tabs at the bottom (separating the app into ‘products’, ‘sources’ and ‘playback’ sections) and switching between them is a streamlined experience.

Pairing the speaker to other HEOS products is an easy drag-and-drop affair. It feels a little counter-intuitive that if two products are playing music from different sources, the one you move gets overwritten - but you soon get used to it.

After letting the HEOS 1 run in over a few days, we kick it off with a stream of The Chain by Fleetwood Mac. Even though it is small in stature, there’s relatively strong punch from that bass drum intro.

Each thump strikes with enough positivity to get your head nodding along, but when the drumbeat is replaced with a more modulated bassline, the HEOS 1 doesn’t shy away from digging up the detail and presenting them both distinctly.

Not that it overtakes the rest of the song. There’s enough room for midrange and cymbals to come into their own.

The former is clean and clear, with Stevie Nicks’ vocals reaching out well into our medium-sized testing room. The latter, meanwhile, shimmer without any unwanted brightness.

Try it out with something messier (Holland, 1945 by Neutral Milk Hotel) and the HEOS 1 pays a good amount of attention to the mesh of instruments.

The song ends with a blend of noises, each of which are fuzzily distorted, but the HEOS 1 keeps track of them all. It doesn’t have the tightest grip when it comes to organisation, but it’s still better than many nominal rivals.

While they might not look alike, the HEOS 1 has many of the same winning characteristics of the HEOS 7. The even tonal balance and laid-back approach to music, which makes listening an easy (if not the most invigorating) experience, is not easily dismissed.

However, it also means the HEOS 1 suffers from similar shortcomings - it sacrifices a little drive and excitement in favour of a relaxed approach.

Playing the energetic, grungy No One Knows by Queens of the Stone Age (via our Naim server), we find this speaker handles the dynamic change reasonably well, but there are rivals that do it better.

The HEOS 1 is a strong wireless speaker with ample functionality and sound quality that challenges much of the competition.

For a potentially portable speaker that’s easy to listen to, it’s an attractive purchase – especially if you’re already integrated into Denon’s ecosystem.