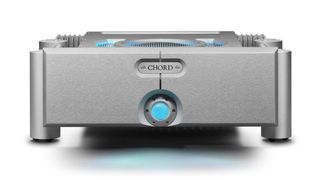 Late last year, Chord Electronics announced a new £90,000 flagship amplifier, comprising a preamp and two mono power amps – all based on its Ultima technology that took three decades to develop.

The two additions, which arrive alongside a brand-new phono preamp that has also been launched today as part of Chord’s 30-year anniversary celebrations, see the Ultima topology trickle down to a new price point.

Ultima is originally based on a technical paper by Dr Malcolm J Hawksford (emeritus professor at Essex University), which was later refined by Bob Cordell of Bell Labs, and has been developed and advanced by Chord Electronics’ owner and chief designer John Franks.

As a result of the design allowing Chord’s custom-designed output transistors to perform well, the company heralds Ultima its most accomplished amplifier design.

The mono power amps’ aircraft-grade solid aluminium casework - available in a choice of 'Jett Black' or 'Argent Silver' finishes - is complemented by an aircraft-grade aluminium fascia, which is enhanced by a 28-mm thick front panel and decorated by a familiar spherical polycarbonate power button that illuminates for standby and operation modes. A discreet switch in the split line of the front panel enables the light to be dimmed.

At the opposite end are balanced and unbalanced connections and loudspeaker terminals.

The chassis’ side blocks (which Chord calls the ‘Integra Leg system’ allow for the stacking of various other Chord Electronics products when using the dedicated Choral Ensemble stand.