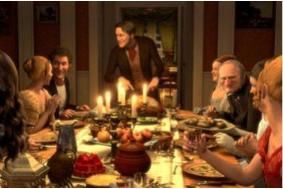 The company says that the movie, starring Jim Carrey and 're-envisioned by Academy-Award winning filmmaker Robert Zemeckis', will be 'a groundbreaking multi-sensory, three-dimensional hi-def home entertainment experience that captures the fantastical essence of the classic Dickens tale'.

However, with that disc not on sale until the Autumn, Disney is working on ways to spread the 3D word in advance of that time. It's created a 3D Showcase Disc of content, which it will make available to hardware manufacturers to be bundled with new players and other products.

The disc includes Walt Disney's animated short Working for Peanuts, promotional trailers for upcoming 3D releases such as Disney's A Christmas Carol, Tim Burton's Alice in Wonderland and Disney/Pixar's Toy Story 3, and original content made exclusively for the showcase title.