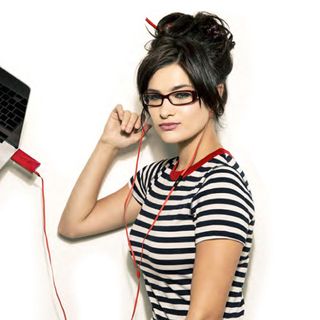 LH Labs – the first division to branch out from Light Harmonic – has announced the UK launch of Geek Out at the Bristol Sound and Vision Show 2014.

According to the manufacturer, the Geek Out is a new high-resolution digital-to-analogue converter (DAC) that will be able to play "any current or anticipated audio format".

Geek Out has now arrived in the UK following a successful crowdfunding campaign on Kickstarter, which first set out with a target of $28,000 but went on to raise more than $300,000 and secure over 2000 orders.

BLOG: High-res audio – the science behind the numbers

According to LH Labs, the high-definition DAC features an amplifier ten times more powerful than your typical laptop amplifier, so should mean you can play music louder without compromising on the clarity of the audio.

The Geek Out comes with two headphone jacks and '3D audio technology' that claims to emulate the way your ears hear. The product comes in four colours – black, silver, blue and red.

It is the first in a new line of consumer electronics products manufactured by LH Labs. The company has taken much of the technology that had been developed by Light Harmonic for the Da Vinci DAC and used it in the Geek Out. It costs $199 (plus $45 for non-US residents) and will ship this spring.

Other products set to follow include the Geek Pulse, a high-definition DAC and headphone amp ($499) and Geek Blue, a Bluetooth component that lets you stream audio wirelessly ($249). Both will ship from May.

Meanwhile, the LightSpeed Jr USB cable is also due to follow in May – a USB cable that claims a bandwidth of 1GB per second. It will retail for $99 and will be available outside the US for an extra $10.

MORE: High-resolution audio – all you need to know