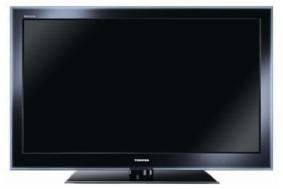 Highlights so far include:

• No 3D TVs yet until the arrival of the CELL TV, probably in second half of 2010. It will use active shutter technology

Here's a breakdown of all the new models in more detail:

Toshiba's 2010 range has three key tech areas to trumpet: you can expect to see LED backlighting in the company's premium ranges, delivered in both edge-lit and local-dimming forms, plus DLNA and USB-driven enhanced connectivity, the former enabled by wireless dongle in most cases.

Freeview HD will also be offered in several models, including both premium, fully-loaded sets and more affordable entry-level models, and in screen sizes ranging from 32in up to 55in.

The company is also introducing a new SoundNavi feature, designed to optimise sound performance for the relative position of the TV within the room (for example, on the wall, in free space or near to other boundary walls). As you'd expect, this is being reserved for pricier models in the new range.

Other familiar Toshiba technologies, such as Resolution+, will roll out to more models, with the emphasis on providing both a better upscaling solution for DVD and other standard-definition sources, and better deinterlacing for 1080i HD.

Finally, energy-efficient eco flat panels are virtually standard within the new range. All Toshiba products from 19in upwards will be B+ or A rated.

Full range details are as follows:

AV and CV series; available in 26in and 32in. These are affordable, Freeview-based 50Hz models with HD-Ready resolution and LCD technology.

LV and KV series: these step up to 1080p resolution, and are available in 32in and 40in sizes. Both are 50Hz LCD models, and feature USB media support.

RV series: offered in 32, 37 and 40in, these are the most affordable Freeview HD sets. They're basic 50Hz LCD panels, but offer 1080p resolution.

SL series: these are super-slim, and will be offered in 32, 40 and 46in. They feature LED edge-lit backlighting plus Freeview HD, 1080p resolution and 100Hz.

WL series: the current top-of-the-range model, offered in 40, 46 and 55in. These are all-singing, all-dancing 200Hz models with LED backlighting and Freeview HD.

Toshiba can't commit as yet to a release schedule for the CELL Regza TV, which uses a new KIRA LED panel with 512 LED dimming zones, plus on-the-fly 2D to 3D conversion. At the moment, it's likely to be coming in the second half of 2010, and will be Toshiba's very first 3D TV set.

Finally, Toshiba has announced six DVD players – four of which sport HDMI outputs – plus four DVD recorders, one of which will be a DVD/VCR/HDD combi unit. There'll also be two portable DVD players, one with integrated Freeview tuner to make World Cup watching easier this summer.

However, the most interesting products are the new BDX-2100 Blu-ray player, a Profile 2.0 deck that immediately replaces the existing BDX-2000. It costs £129.

There'll be at least three other BD models launched later this year.

Toshiba also released details of its new HDR-5010, a Freeview HD digital PVR with 500GB memory set to be launched in June in time for the World Cup. It features twin USBs, and Ethernet port plus, intriguingly, three HDMIs. Price is £349.

And we've just been shown a prototype media player with 1TB hard disk, HDMI and wireless connectivity and 1080p resolution, called StoreTV+. It will be available in Q3 this year.