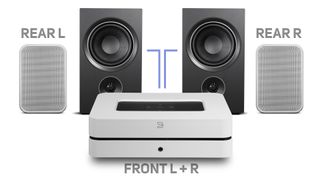 We're big fans of Bluesound, the Powernode 2i streamer in particular, but it's just climbed even higher in our estimation – thanks to a hotly-anticipated software update that gifts Powernode owners surround sound.

The BluOS 3.8 update means those with a Powernode 2i (with HDMI) or a Soundbar 2i hooked up to a TV can now add a pair of Pulse Flex speakers to act as surround channels. Et Voilà: true Dolby Digital surround sound. Simply fire up the wizard in the BluOS Controller and you're in business.

There's good news for owners of NAD M12 and M32 digital amps too: they get Apple AirPlay 2 with the addition of an MDC BluOS 2i card. Meanwhile, owners of the NAD Masters M10 streaming amp will be treated to a neater front panel display layout.

Want to know more about the Canada-based Sonos rival? Check out all our Bluesound news and reviews.