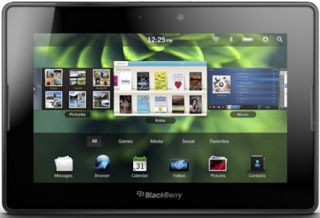 BlackBerry has released an upgrade to its Tablet OS for the PlayBook. The update upgrades multimedia features and improves connectivity with BlackBerry Bridge.

The Tablet OS v1.0.7 is available for free via an upgrade accessible via a wi-fi connection. New PlayBook tablets will come with the latest software.

Also new on the BlackBerry PlayBook are hot icons for direct access to the BBC News and BBC iPlayer websites.

The software upgrades allow you to pinch and zoom in video, while you can move portrait mode is now available in pictures. In tandem with BlackBerry Bridge, there is now improved support for accessing and saving attachments.

The PlayBook focuses on its web browser rather than apps and will now have icons for quick access to iPlayer and the News website.

Again, new PlayBook tablets will have these out of the box while existing users will get them via the upgrade.

The Tablet OS v1.0.7 upgrade is available for free now.

Look out for our review of the BlackBerry PlayBook in the September issue of the magazine, out on July 27th.