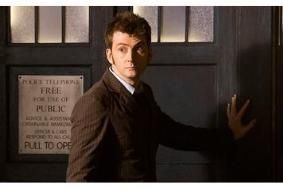 The Doctor Who specials will be broadcast on Christmas and New Year's Day. There will also be HD specials from The Royle Family, Gavin and Stacey, Catherine Tate, Cranford and Victoria Wood.

In the week between Christmas and New Year there will be HD broadcasts of the remake of Day of the Triffids, The Turn of the Screw and the Royal Shakespeare Company's Hamlet with David Tennant in the lead role.

Christmas Eve will be a musical showcase with South Paciific (the 1958 film of the musical), The Tsarina's Slippers (ballet from the Royal Opera House) and carols from King's College, Cambridge. Jools Holland will see in the New Year with his regular Hootenanny.

There'll be plenty of HD films to watch too. The Incredibles will follow the Queen's Speech on Christmas Day, with Herbie: Fully Loaded, Flushed Away and Pirates of the Caribbean: At World's End on Boxing Day.

At other times the Beeb will show 101 Dalmatians, Miss Potter, Chicken Run, Mary Poppins and the Wallace and Gromit films.

Top Gear fans will get to see Jeremy Clarkson and the gang's trip to Bolivia on December 27th, and Julia Donaldson's children's classic The Gruffalo will air on Christmas Day afternoon.