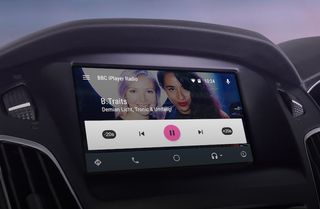 If you’re one of the 22 million people whose journeys behind the wheel are, according to the BBC, soundtracked by BBC radio stations (perhaps you tune into Lauren Laverne during your morning commute, or are partial to unwinding to a Radio 4 podcast on your way back home) we’ve some good news: your in-car BBC radio experience is about to get a lot better.

The touch interface is split into four sections, one of which is ‘Stations’ - this is where all the BBC’s UK national and local radio stations can be accessed.

Last but not least is ‘Downloads’, which is where listeners can store downloaded programmes for offline playback, uninterrupted by troublesome tunnels and the like.

The app works with the Android Auto and Apple CarPlay experiences.

Android owners can either connect to a compatible car display or download and run the Android Auto app on any Android smartphone running Android 5.0 or above - which should include yours, if it’s been released in the last three years. It also supports voice commands, allowing you to control your in-car audio experience while in the ‘ten-to-two’ steering wheel position.

iPhone owners, on the other hand, will need an Apple CarPlay-equipped vehicle.

This BBC film on audiophiles in 1959 is a masterpiece