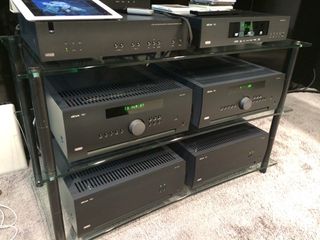 We've seen quite a few smaller products from Arcam's accessories range – such as the new miniBlink DAC – recently, but here in Munich the company is showcasing some serious new amplification and a new universal disc player.

The stereo P49 is joined in the Arcam line-up by the forthcoming A49 stereo integrated amp (below), which is expected to cost around £3500 when it goes on sale shortly. All three models have been designed and engineered in the UK, but will be built in Rochester, upstate New York.

Arcam claims the A49 and P49 deliver 200W per channel into 8ohms and 400W into 4ohms. They deliver 50W in pure Class A mode, while allowing for extra power reserves from the latest generation Class G topology.

The A49 has analogue and XLR inputs, an MM phone stage and headphone output.

As you'll also see from the picture below, there's a next-generation DVD, Blu-ray and SACD universal player on the way too, the Arcam FMJ UDP411.

There's no confirmation on price as yet, but it's expected to be in the shops in the third quarter of this year.

Also on display was the Arcam AV950 7.1 AV pre-processor which uses the same DACs as those in the firm's D33 'reference' DAC and can handle all the latest high-resolution surround sound formats.