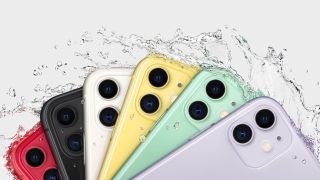 Another quarter, another record. Apple has posted another round of huge numbers for its 2020 fiscal Q1, thanks to impressive growth in sales of products and services.

Apple posted quarterly revenue of $91.8 billion, which is up 9 per cent year-on-year, and an all-time record for the company. Tim Cook, Apple’s CEO, said the figures were "fueled by strong demand for our iPhone 11 and iPhone 11 Pro models, and all-time records for Services and Wearables".

Services, which refers to the likes of Apple Music, Apple TV and iTunes, saw net sales of $12.7 billion, up nearly 17% year-on-year. The 'Wearables, Home and Accessories' division, which includes AirPods, AirPods Pro and Apple Watch, posted $10 billion of net sales, up almost 37% year-on-year.

But it was iPhone, as ever, that drove the biggest numbers, bringing home just under $56 billion in net sales, up 7.6% year-on-year.

Of course, the Cupertino giant stops for no man, and the iPhone 12 is set to launch this September, with not one but four phones rumoured for release.