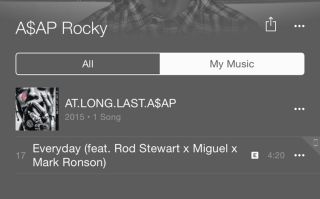 The story claims audio manufacturers in Japan are "preparing" for an Apple hi-res audio service that would take advantage of Apple's Lightning connection to natively support hi-res on iOS devices.

Using an app such as Onkyo HF player you can already output hi-res music from an iPhone via the Lightning connection. And there are already headphones on the market that connect via the Apple Lightning port, such as the Philips M2L earphones, and support hi-res music. It might therefore make sense for Apple to bring this functionality in-house.

The Apple rumour mill rarely stops turning, and we've seen reports suggesting the next iOS devices could ditch the traditional headphone jack for the Lightning connection - or for a completely new headphone connection altogether.

The same Japanese website has been behind many of the Apple hi-res rumours, such as the report last year that iOS 8 would support hi-res audio. Previously, MacRumours had suggested iTunes was in line for an overhaul that could see high-res audio downloads coming to the iTunes Store. The idea that Apple was investigating 24-bit iTunes downloads began as far back as 2011. Now it seems likely streaming audio would be the focus.

Rumours abound that Tidal will make the leap to hi-res audio streams some time in 2016, most likely using the MQA codec developed by Meridian, with the possibility of an official announcement at CES 2016. Could Apple follow suit? We'll have to wait and see...

MORE: High-resolution music - everything you need to know