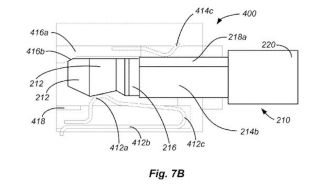 The patent (number 9,142,925) is for a “D-shaped connector”, which would replace the current 3.5mm plug found pretty much everywhere, including the iPhone.

The drawings indicate external contacts along the connector, which would be responsible for left and right audio, and microphone signals. The ground contact would lie on the plug’s tip.

The most notable change in the design from the current one is the shape. Apple’s idea is to have a D-shaped connector, with a flat side. This would restrict it to only being able to be inserted into D-shaped receptacles, which could include future iOS devices such as next year's iPhone 7.

While dedicated headphones for the iPhone are already on the market - and many improve on the buds Apple supplies - these still use the standard 3.5mm connector. A change in connection would be a huge move for consumers and the headphone and accessory manufacturers.

Apple is no stranger to tweaking with its connections, having introduced the new Lightning connection back in 2012. This change meant the latest iPhone model at the time (iPhone 5) didn't work with legacy iPod docks. Philips has previously produced the M2L headphones that use the Lightning connector, but these remove the ability to charge the device at the same time.

The new iPhone 6S and iPhone 6S Plus are also few millimetres thicker than their predecessors to compensate for the new 3D-Touch technology. If Apple wants to produce thinner smartphones, it could take more than just slimming down a headphone connector.