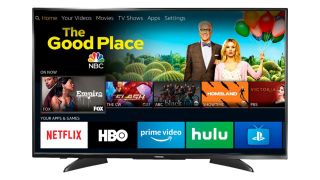 Amazon Prime Video subscriber in need of a new (and cheap) telly?

You can currently bag a Toshiba 4K HDR TV with Amazon's Fire TV video service built-in for just $199.99. Best Buy is offering savings up to 39 per cent on the 43in and 50in models in the Toshiba Fire TV Edition range, with the 55in variant also at a bargain, sub-$500 price.

Last year Amazon and the US retailer teamed up to bring a selection of 4K and HD TVs with built-in Fire TV functionality to the US and Canada.

The bundled Alexa-compatible remote will allow voice commands for launching apps, searching for TV shows, playing music and switching inputs, among others. Owners of an Amazon Echo device will also be able to use Alexa voice control hands-free.

In addition to all that smart access, there is 3 HDMI inputs, a USB input and HDR10 support.

We haven't reviewed these particular models, but the last affordable Toshiba 4K TV that came away from our test rooms received a credible four stars for its good overall picture and 4K upscaling of standard-def and Full HD content. So here's to hoping for consistency...