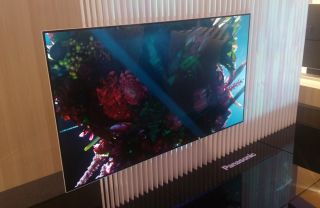 It's hard to come away from Europe's biggest technology show and not think the consumer electronics industy is in rude health. Thousands of metres of showfloor are full to bursting with 8K and OLED TVs, 2-in-1 tablets, wireless headphones and eye-watering home cinema, not to mention wearables, white goods and almost anything else you can think of that comes with a plug attached.

The huge halls given over to the big-hitters of the technology world, from LG to Lenovo, Panasonic to Philips, Samsung to Sony, were once again an assault on the senses thanks to ever more extravagant exhibitions of new and old products. But there was plenty of action across the rest of the show, and plenty of smaller names making a big show of their wares.

It may only have been a prototype but the news that Panasonic is working on a new generation of OLED TVs is more than welcome. At the other end of the IFA show floor the latest range of LG 4K OLED TVs looked stunning so with Panasonic promising better than ever black levels, and showing an impressive comparison between its new screen and existing models, we can’t wait to see the finished version.

It was hidden away with barely a line to its name - and certainly no mention in the Sony press conference - but the shell that signified the impending launch of a Sony Ultra HD Blu-ray player is good news for the format and for 4K fans. And as we later found out, we may not have long to wait to see the finished article…

Lightning headphones are likely to be all the rage following the launch of the iPhone 7, which will likely do away with the headphone jack, but as well as plenty of normal Lightning headphones there were these striking Audeze efforts. The world’s first planar magnetic in-ears, they may look a bit Star Wars but assuming they sound out of this galaxy then they're sure to have plenty of takers.

You have to look pretty hard for hi-fi at IFA, with the focus on TVs, wearable tech and a whole host of white goods. So hats off to Pioneer for not only delivering some two-channel technology but focusing on the increasingly forgotten CD spinner. We hope it sounds good.

It’s not just the Japanese giants at Messe Berlin, there’s more than enough space for smaller names too - like Glasgow’s RHA. The company has successfully established itself in the crowded headphone market in a matter of years, and alongside two new pairs of IEMs, we were taken by the company’s first DAC and headphone amp.

Another addition to the 4K OLED party, Philips sets its TV apart with the addition of 3-sided Ambilight technology and an Android TV interface. It won’t be cheap but it will look like nothing else on your living room wall - and we certainly wouldn’t say no based on appearance alone. Look out for a full review.

MORE: Philips unveils its first OLED TV, a 55in 4K screen with Ambilight

It’s not just TVs that can deliver 4K video of course and alongside an honourable mention for JVC’s new flagship £30,000 DILA 4K projector we were impressed by the Hisense Laser Cast TV (it’s not a TV). A huge 4K image from not very far away makes this short throw projector perfect for almost anywhere you’ve got a bit of wall space.

Yes, they’re very expensive. And yes, much to our surprise, not everyone was completely taken by the design. But, we’ll (almost) guarantee that if you get your hands on the BeoSound 1 (or 2) wireless speaker you’ll start to wonder if maybe you could afford one. All the tech specs seem to be ticked off, they’re beautifully made and, touch wood, they should sound pretty good too.

The TV market has shrunk dramatically in recent years in the face of increasingly low margins and high competitiion so it was good to welcome back Sharp to the fold. The company is planning a serious return to Europe and the UK, and while we'll definitely wait and see before we get too excited, the company’s crazy collection of IGZO panels made us hope that those in charge make a real fist of it this time.

MORE: Sharp returns with more than 50 HD and 4K TVs

You’ve got to make a bit of a show to stand out from the crowd at a consumer electronics show, even if you’re Sony. A gold-plated Walkman that’s set to go on sale for €3300 certainly did the job.

LG didn't have too much to shout about at IFA - luckily the company's 4K OLED TVs spoke for themselves - but it did go to the trouble of making a show-stopping tunnel of OLED screens. There were 216 count 'em 55-inch OLED panels in all, delivering half a billion pixels of dancing colours. But don't take our word for it, you can watch the full LG OLED light show here.

See all the IFA 2016 news, reviews and videos