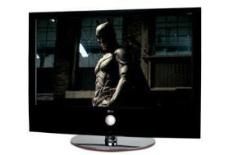 Just when we thought LG's much publicised Scarlet range couldn't get any sexier, the 42LG6100 struts into out test room. It looks just like the standard Scarlet, except all the internal bits and pieces have been squeezed into a slimmer chassis a mere 4.5cm thick.

You still get an arsenal of connections including four HDMI inputs, component video and two Scart sockets, plus a handful of picture enhancing technologies.

For example, Intelligent Sensor adjusts picture quality to suit conditions – in the process, LG claims, helping to reduce power consumption by as much as 62 per cent. Sadly, the picture it produced, especially the colour balance, wasn't that special.

Alter the picture settings manually, though, and things are more satisfying, with good improvements in clarity and resolution. With DVD playback, the set does a good job of scaling Snakes On A Plane to match the TV's Full HD panel. With Freeview, the 100Hz LG shows good solidity and a detailed picture.

Beautiful with Blu-ray
This LG, though, is built for Blu-ray – and it doesn't disappoint. Movement is well handled, and the Tru Motion picture processing technology has a similar effect to Philips 42PFL7603D's HD Natural Motion.

So it's smooth with animated films, but doesn't really suit more conventional titles. Good edge-definition helps create an image with fine depth and realism, but it can't quite scale the heights of the Philips.

The speakers sound clear and open, but there's a lack of body and solidity with low frequencies.
This Scarlet set is an eye-opener, in terms of the way it looks and performs. The fact that it's super slim adds to the appeal, as does the price tag.