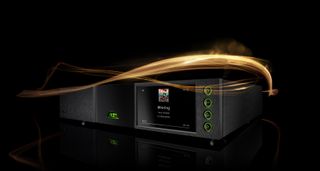 Streaming isn’t the future of music; it’s the right now of music. CD sales have collapsed like an unprepared triathlete and, while the vinyl resurgence is a delight to behold, it’s a drop in the ocean compared to those who are no longer buying Compact Discs.

Streaming, though, is already hugely established. In fact, it recently hit a record high - UK music lovers streamed a chart-busting 114bn tracks on streaming services in 2019.

Let’s be honest, a huge part of that huge success is down to convenience. Spotify, Tidal, Qobuz, Apple Music, Amazon Music, Deezer and a whole load of other streaming services are available on millions and millions of devices across the world, from phones to tablets, TVs to wireless speakers.

The problem is that so many of these devices aren’t designed first and foremost with sound quality in mind (and we’re even including many of those wireless speakers).

The good news is that convenience and quality aren’t mutually exclusive. You can benefit from the rise of music streaming, getting access to more-or-less every song ever recorded, and have it sound utterly fabulous. You just have to avoid the sea of so-so wireless speakers and buy something serious from a company with proper hi-fi heritage.

That’s where Naim comes in.

Naim has been designing and building hi-fi components in Salisbury, England, for over 46 years, and while the company was initially considered something of a plucky upstart, making waves with its innovative designs and attention-grabbing marketing, it’s since become one of the most highly respected hi-fi companies in existence, receiving too many What Hi-Fi? Awards to count.

The reason we and so many others love Naim so much is largely down to its single-minded dedication to sound quality above all else. “Every Naim product is conceived, designed and engineered entirely in service of the sound, revealing a pure experience of music that is as close as possible to its original live source” is the company’s claim, and its track-record speaks to its veracity.

Of course, there are many great hi-fi companies that have failed to convincingly make the move to streaming, and that’s because great sound quality isn’t enough on its own - it needs to be combined with clever software, intuitive apps and new technology. It’s a huge departure from traditional hi-fi engineering.

That’s what makes Naim’s streaming success so impressive. Its first consumer streaming product, the NaimUniti, launched in 2009 and so effortlessly combined streaming smarts with superior sound that we gave it an Award that very year. Since then, Naim streaming products have won a further 22 What Hi-Fi? Awards. Yes, we did count those.

That record has been achieved through constant evolution and innovation. Naim's current streaming offering is peerless in the way it combines sound quality, usability, next-gen features, design elegance and bomb-proof build.

The big difference between the current range and previous models is the new, bespoke streaming platform. Instead of opting for the kind of off-the-peg platform that most companies understandably go with for cost and simplicity reasons, Naim invested three years and 25 engineers in the development of original software and hardware that would make the most of streaming services such as Tidal, Qobuz and Spotify (which are featured natively) while also offering true openness and future-proofing through the addition of Google Chromecast built-in. Of course, your own digital library of tunes is supported, too, as is internet radio, Bluetooth, AirPlay 2 and Roon.

Crucially, whatever your music streaming preferences, Naim’s streamers don’t simply support them, they make them sound their very best, thanks to a combination of the company’s historic commitment to reproducing music as faithfully as possible and next-gen streaming features such as Low Voltage Differential Signalling (LVDS), which reduces susceptibility to external noise, and a new clocking architecture for sources that ensures greater accuracy.

Interest piqued? Then you’ll be pleased to learn that there are various options for boarding the new Naim stream train. You can start with the Mu-so wireless multiroom speaker family. In 2019, launched the Naim Mu-so 2nd Generation and Mu-so Qb 2nd Generation – new products, same unanimous industry praise. The Mu-so 2nd Generation has the same winning looks as its predecessor, but it’s actually 95 percent new – new drive units, new digital signal processing, extra connectivity, and even a new cabinet. There’s the usual host of streaming options, plus Bluetooth for offline streaming. And thanks to the HDMI ARC output, you can enhance the audio from a compatible TV and control it through just one remote control.

The Mu-so Qb 2nd Generation, meanwhile, also retains the stellar design credentials of its forebear, but it too features Naim’s new streaming platform with greater speeds and increased accuracy.

Both products picked up a perfect five out of five in our reviews, and earned themselves 2019 What Hi-Fi? Awards for their trouble.

You can then step up to the gorgeous, colour screen-fronted Uniti Atom (£2249), Uniti Star (£3499) and Uniti Nova (£4199): full, just-add-speakers systems that will combine said streaming with any physical sources you might throw at them, from turntables to TVs; the Uniti Core (£1899) will rip your beloved CD collection and serve it to any player in the house or act as a digital source in its own right; the ND5 XS 2 (£1999), NDX 2 (£4999) and super high-end ND 555 (£12,999), meanwhile, are dedicated streamers, ideal for those who already have quality amplification. We use the ND555 as our reference digital source here at What Hi-Fi - we can’t give it a better recommendation than that.

All of these devices have recently gained some new skills, too. Apple AirPlay 2 and Apple Music are now available across the family, while native 24-bit Qobuz integration has been added to the Naim Uniti and network players, and will soon land on the Mu-so 2nd Generation family. More features and functionality are on the way soon, all via free software upgrades. These devices just get better and better.

We’ve been so impressed by Naim’s new streaming products that we’re yet to give any of them anything other than a five-star rating, but you needn’t take Naim’s or even our word for their quality. Instead, you can and should check them out for yourself at your local hi-fi shop or even an event such as the Bristol Hi-Fi Show, which runs from the 21st to the 23rd of February.