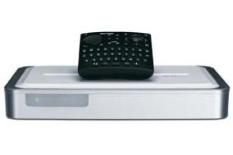 An interesting first stab at the home hub, but the TV+ isn’t fully realised

As Archos launches its fifth generation of portable players, it's also making a bid for the lounge with this, the TV+. In fact, according to Archos, the TV+ ‘is set to become a must for every living room in 2008'. Well, it's not bad, but let's not get ahead of ourselves.

One of the TV+'s main selling points is its ability to record live TV, but it's hampered by not having its own tuner. In order to record anything, you need to connect the TV+ to an external Freeview box and your TV. The problem is that most people's televisions have built-in tuners, and there's no way to get the TV+ to record from those.

The answer? Wireless media streaming. The Archos can connect to your home network and access all of the audio and video stored on your PC. You can also connect the TV+ to your computer, using USB, and transfer files to the Archos's own hard disk.

Resolution issues
Unfortunately, the TV+ outputs only a 576p signal (even through HDMI), so will refuse to play any video files that exceed this resolution. It will handle loads of formats, though, including AVI and DivX. Picture and audio files stream with almost no stutter, and quality is faithful to the original file.

The TV+ ultimately fails to be truly convincing. As a recorder, it struggles by not having its own tuner; as a media streamer, it's let down by a low resolution. It's simply not a ‘must-have' product.