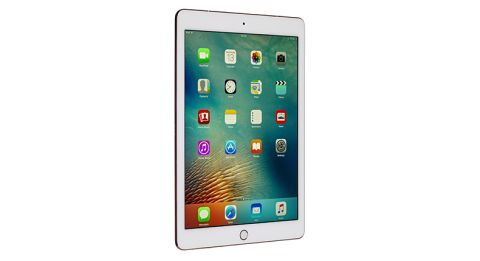 Apple owns the premium tablet market and the Pro 9.7 only cements its position with a great all-round performance

The iPad Pro released last autumn was a powerful, impressive machine that did a number of things no Apple tablet previously had done.

But for all the power, its large 12.9in screen was never going to be everyone’s cup of tea. It was only a matter of time until Apple launched a smaller, more portable and more appealing version for the masses.

And here it is, the new iPad Pro 9.7. To some it will simply be a more powerful and more expensive iPad Air 2, but look beneath that gorgeous retina display and you’ll find there’s a lot more going on here than you initially might think.

Once removed from Apple’s exquisite packaging (unboxing any Apple product is an event in itself), first impressions are that it does indeed look and feel pretty much identical to its sibling, the iPad Air 2.

Reach for the tape measure and you’ll see their dimensions are identical, drop them on the scales and their weights match up too. But, a more detailed look around the exterior of the tablet uncovers a few key differences.

Firstly, there’s a slight bulge where the 12MP iSight camera sits – it’s the exact same camera as that found on the iPhone 6S, complete with True Tone Flash and 4K recording.

You’ll also see two lines of perforations along the top edge of the iPad which indicates the presence the same four-speaker system initially introduced on the 12.9in Pro.

Although it uses the standard Lightning connector for charging, you’ll also notice a trio of small rings on the left edge, which is Apple’s Smart Connector.

Again, first introduced on the 12.9 model, this allows you to hook up Apple’s Smart Keyboard, a protective case that doubles as a stand with built-in super-slim foldable keyboard.

Also optional is the £79 Apple Pencil, which allows creative types to treat the screen of the iPad as if it were a sheet of paper.

In conjunction with Apple’s slick and intuitive iOS 9 operating system the Pro is a joy to use and any navigating or multi-tasking is handled with fluidity and ease.

Prices start at £499 for a 32GB wi-fi only model. There’s also a 128GB storage option and for the first time on an iPad, a monster 256GB version (which we tested). As always, all variants are available as wi-fi only models or wi-fi and cellular.

The usual Apple colours are available – silver, space grey and gold – but there’s also a rose gold version just for the Pro 9.7, to match the finishes available for the iPhone SE, 6S and 6S Plus.

The screen is one area where the new iPad Pro 9.7 really excels.

The resolution (2048 x 1536 pixels) matches that of the Pro 12.9 and Air 2 – but Apple claims it also offers 25 per cent greater colour saturation, 25 per cent more brightness and a whopping 40 per cent less reflectivity than the latter.

It also uses the same P3 wide colour gamut found on Apple’s own 27in iMac with Retina 5K display. Even the Pro 12.9’s screen doesn’t boast these levels of performance.

The Pro 9.7 is also the first Apple tablet to feature a True Tone display. Four ambient light sensors on the front of the tablet alter colours and the picture intensity depending on the levels of ambient light present.

Picture quality has always been one of the iPad’s strengths, and the 9.7in Pro is no different. Watch Inside Out, and colours appear beautifully judged – the greens, reds and blues of the colourful characters show fantastic depth and richness without appearing sickly or oversaturated.

Edges are sharp and motion doesn’t prove much of an issue either. Switch to Spectre and there’s good contrast and definition to every one of Bond’s sharply pressed suits.

The action in the snow-white Austrian mountains contrasts well with the nighttime car chase through the streets of Rome. The screen manages to stay composed and there’s loads of detail on display as the Jaguar and Aston Martin engage in a thrilling game of cat and mouse.

And it’s watching dark scenes in a brightly lit room where reflections can be distracting. The Pro 9.7 doesn’t remove them completely, but they’re definitely more subdued and less intrusive than they are compared to the Air 2.

We were big fans of Apple’s new four-speaker system when we heard it on the iPad Pro 12.9, and on the smaller tablet it’s just as accomplished and entertaining.

The extra speakers add width, detail and a great deal more composure compared to the Air 2, which sounds coarse and messy in comparison.

We don’t automatically find ourselves reaching for a pair of headphones, and could quite easily use the built-in speakers to watch an episode or two of Game of Thrones or even a feature-length Hollywood blockbuster. After all, this how the majority of people who use the iPad Pro will probably listen to it.

With Spectre, the iPad handles dialogue, explosions and the movie’s score with a great deal of skill. The speaker manages to sound natural and captures the gruff tone of Bond’s voice remarkably well.

Switch to using a pair of headphones, such as the Sennheiser Monentum M2 in-ears, and you’re greeted with a balanced and measured sound. But, we play Alt J’s Breezeblocks and although there’s enough detail here, we find the Air 2 sounds livelier and more expressive. The Pro can’t follow the upbeat tempo as rigidly as the cheaper tablet.

We had slight reservations over the sound quality of the recent iPhone SE too – let’s hope this isn’t a sign of things of things to come when the new iPhone 7 is launched later this year.

The iPad’s camera performance may not sway your buying decision as much as it would on an iPhone, but you’ll be pleased to know the Pro 9.7in can take decent snaps and the ability to film (and edit) 4K video is a welcome bonus.

This is all made possible by the inclusion of that 12MP iSight camera, complete with True Tone Flash. We already know the same camera takes great point and shoot pictures on the iPhone 6S and the results here are just as satisfying.

You’re actually getting a better spec camera here with the 9.7in version than on the larger Pro, which has to make do with a relatively miserly 8MP flash-less camera that’s only capable of recording in 1080p.

It’s a similar case with the front-facing camera, where you’ve got access to a 5MP camera with Retina Flash, compared to a 1.2MP flash-less version on its bigger sibling.

Apple’s thrown everything, including the kitchen sink, at the iPad Pro 9.7. Not only has it succeeded but, in some ways, it has even managed to outshine its big brother.

The smaller screen is a seriously tempting proposition, and even though the sound quality through the headphone jack has taken a slight hit compared to previous generations of iPad, the Pro makes up for it with the fine sound from its four-speaker system, brilliant picture quality, speedy processor and excellent ease of use.