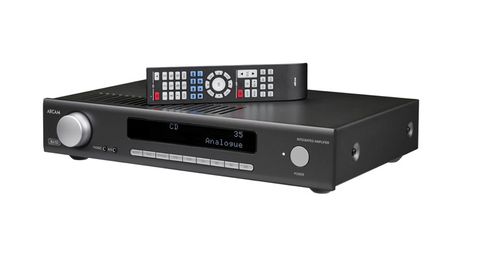 Extra tech and improved performance at a reasonable price is always a tough ask. The SA10 doesn’t quite scale the heights, but will be an ideal solution for many

Replacing most things like-for-like is often simple. An upgrade, on the other hand, is decidedly more tricky.

Certainly so when the product for improvement is one as good as Arcam’s Award-winning A19 integrated amp.

The task here is positively gargantuan: throw in a face-lift, a grander array of features and improve upon the performance, while limiting the price to only £50 more than the predecessor of five years ago.

Though Arcam may merit commendation simply for trying, the positivity in this review is not simply down to goodwill or admiration.

Though we’re reluctant to appear superficial, the first aspect of the SA10 we fall for is the fact it has had a spruce-up.

It remains recognisably an Arcam device, happily retaining the chunky volume dial we like so much - but it has a somewhat softer appearance without losing its industrial edge.

Channel select buttons are still located beneath the display screen, but with a new-look (and decidedly tactile) power button to the right and 3.5mm headphone and aux jacks to its left.

The aux is one of five analogue inputs, with four RCA terminals – one switchable for use of the SA10’s built-in moving magnet phono stage – located on the back.

Also at the rear are three digital input terminals – one optical and two SPDIF – leading to the amp’s 32bit Sabre ESS9016K2M DAC.

That array of features, a significant upgrade on the analogue-only A19, is put into better perspective when you take into account the Cyrus One HD we tested recently - it adds only aptX HD Bluetooth to its analogue capabilities, yet costs almost half as much again.

But the spec-sheet is all of little consequence, of course, unless the SA10 can at least match the sonic performance of its predecessor.

We make a good start, then, when we begin testing and are greeted with a familiar sense of scale and fullness of body.

It isn’t just a solid presentation, it’s delightfully warm. The midrange is richer than a Saudi oil merchant, giving vocals the kind of dimension many competitors lack in their search for outright clarity.

Though that isn’t to say the SA10 forgoes the latter.

There is still plenty of insight in this soundstage, with textures being presented with admirable detail to make what, in that sense at least, is an interesting listen.

While balance isn’t especially skewed – the treble in particular nearly matches the midrange for richness – the one area the SA10 does create quite a few rounded edges is in the bass.

Specifically, it’s the low end via the analogue inputs, where bass frequencies thrum and labour to a noticeable degree.

Things improve markedly in this respect when playing through optical or SPDIF channels, however - and without relinquishing any of that warmth or richness that our ear welcomed elsewhere.

But the real issue holding the SA10 back from reaching the sonic heights of the A19 (and its current market competitors) is its questionable sense of timing and lack of dynamics.

Again it is a case of things improving somewhat when using the Arcam’s on-board DAC, but timing otherwise is particularly bothersome.

Complex rhythmic patterns can feel somewhat jumbled via RCA connections, the slight erring when dealing with simple 4/4 beats can be disorientating.

That isn’t helped by the flattish dynamics, which struggle to give us much clue about leading notes and don't offer much sense of excitement about the music we’re playing.

When you consider its phono stage and digital inputs, the SA10 is a much more affordable proposition than its rival the Rega Brio - but the latter demonstrates exactly the sound quality available at somewhere around this price.

While far from matching the Arcam’s scale or body – though those could both be improved by some judicious system-matching – the Rega's handling of rhythms and expression are clear strengths, and putting the two amplifiers side-by-side results in something of a mismatch.

Mind you, even if you could add the Arcam’s extra features for another £100 (which you can’t), the Rega would not be a one-box solution in the same way as the SA10. That counts for a fair bit in our book.

If that all-in-one aspect is tempting, then let us reiterate: the Arcam is a solid performer with facets of its performance you’ll struggle to match elsewhere at the price.

It perhaps isn’t the like-for-like replacement for the multi-Award-winning A19 we find we had been hoping for. But it's a praise-worthy amp in its own right, one we’re sure will have many admirers.