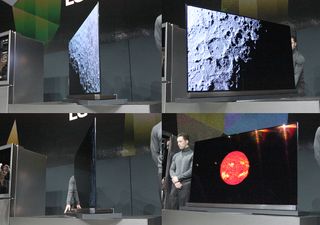 As is customary, LG started the year by announcing a brand new range of TVs for 2016. In amongst the full line-up were two 4K OLED models, the G6 and E6.

Now, the full OLED line-up has been confirmed and a four-strong range is set for release in the UK, with the G6 and E6 being joined by the curved C6 and the B6 'art screen'.

All of the TVs boast 4K resolution screens and use OLED technology, and all four ranges have Ultra HD Premium certification and support HDR content.

The new LG OLED TVs come in 55-inch, 65-inch and 77-inch screen sizes, and all the models are due on sale by June 2016, with the first sets out this month (April). Here's the full lowdown on the differences between each range.

What are the key features?

The following features are present on all four LG OLED ranges.

The G6 is LG's flagship OLED TV range, available in two sizes. It's LG's slimmest ever TV, measuring just 2.57mm in depth and featuring the company's new 'Picture on Glass' design. This is LG's way of saying the OLED tech is so thin and light it can be bonded to a transparent pane of glass.

Another unique feature to the G6 TVs is a rather clever stand, which not only houses the main circuitry and inputs, but also doubles as a soundbar. The 4.2-channel, 60-watt soundbar has been built with Harman/Kardon. It can also be folded back behind the TV and used as a wall mount.

The next range down from the flagship range is the E6. This claims all the same specs as the top-of-the-tree G6, including the Picture on Glass design and the integrated Harman/Kardon soundbar. However the soundbar stand here is a 2.2-channel, 40-watt model.

Also different from the G6 is the addition here of Freeview Play.

Next in the line-up is the C6 range, which is LG's curved OLED offering. Yes, curved TVs are alive and well in 2016. All the main features, including 4K resolution and HDR support, are present and correct but you don't get the Picture on Glass design nor the integrated soundbar stand.

Once again, the C6 also has Freeview Play alongside the smart TV webOS interface.

Last but not least is the LG B6 range. Described as the 'LG OLED Art Screen', this is essentially the C6 range but in a flat rather than curved screen. It also loses support for 3D video - 3D is supported on the C6.