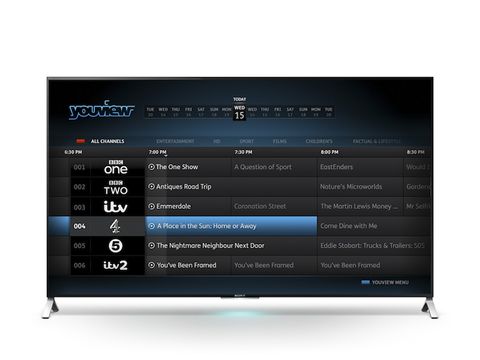 How many remote controls do you have? Too many, probably. Our test room coffee table has so many remotes it barely has space for a breakfast bagel.

That is the one issue with having a YouView box: the service is lovely but it’s a separate offering from the TV. You end up straddling two remotes before inevitably losing one to the gods of the sofa.

Sony’s 2015 TV range marks the first instance where Youview has been available natively, as part of a TV itself. No extra box. No extra remote. What Hi-Fi? was invited to Youview HQ to see it first-hand.

What we saw running was a fully functioning YouView service on a Sony Bravia TV. We're told it’s still a work in progress, but it looks slick enough to be ready.

Start up the TV and you’re greeted by the default Android TV interface. Press ‘live TV’ and you’re off. It’s as simple as that, and entirely integrated. There’s no menu to scroll through, no walls to climb.

You'll find a YouView tile in the Apps section, but YouView is keen to stress that it’s not an app like Netflix or Amazon – it’s simply another shortcut into what is already baked into the TV’s operating system.

The Guide button immediately brings up the YouView EPG (electronic programme guide), which lets you scroll back seven days to see what you missed.

There’s even a miniguide, a small pop-up bar that appears when you press the directional keys during live TV. All the metadata and related programmes show up, just like they would on a standalone YouView box.

The most exciting thing about having YouView in a Sony TV is that it brings the UK’s four main catch-up services to the party. Currently Android TV is a very sparse service, and now it can spring to life with BBC iPlayer, ITV Player, All 4 (formerly 4OD) and Demand 5.

These players are an inherent part of the YouView service, and are as well integrated as the rest of the service. Whatever you choose in the EPG, if available, will open in the relevant player, without pause and without having to exit to load up a separate app. Essentially, the core YouView service has been transplanted lock, stock and barrel into the Sony Bravia ecosystem.

Sony YouView: things to do

Of course, there are fancier secondary features that we’d like, and both Sony and YouView are keenly aware of this. First on the to-do list is to enable a sort of native PVR function, where you can connect a hard drive and record programmes off YouView.

Then there’s talk of integrating extra apps into YouView’s search function, so you could search across, say, both iPlayer and Netflix at the same time.

YouView’s priority has been getting the core service right, but it is confident that it can make these extras work on Sony TVs. Our impression was that there is a mutual desire to have a fully functional and symbiotic relationship. The platform is built with upgrades in mind, and YouView on Sony Bravia is bound to improve.

Then you’ll need an update, which takes the default TV interface and gives it the YouView makeover. This update, Sony says, will come in ‘Summer 2015’. As soon as it arrives we’ll be sure to have a good play and post our verdict right here on whathifi.com.