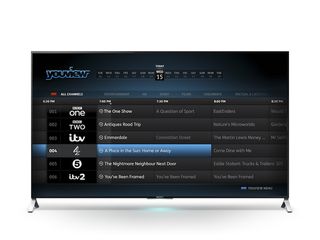 YouView will feature on Sony 4K Ultra HD sets as well as Full HD TVs - to be more precise, any range from W75C upwards, including the super-slim screens from the X90C series. You can see a complete list of Sony's 2015 TVs, from top to bottom, in our coverage of Sony at CES. The YouView announcement comes in the wake of Sony's recent announcement at CES that the vast majority of its 2015 TVs will use Google's Android TV operating system.

YouView, in case you aren't familiar with the service, provides a full suite of catch-up TV and on-demand services, including iPlayer, 4oD, and the normally elusive ITV player. In fact, this is the first time all the main catch-up services have been available on any Sony product. We've been told the service will be available this summer and for those compatible TVs already in living rooms, YouView will be made available via a firmware update.

John Anderson, Sony UK and Ireland country head said, "The way we watch TV is changing, with more demand than ever for a large range of content, when we want it, how we want it. We're delighted to be the first manufacturer in the UK to to announce the addition of YouView to our range of TVs." Sony is the first, but this begs the question will the company be the first of many? Will the likes of Samsung, LG et al, soon follow suit?

We've experienced YouView in set-top-boxes and found it an intuitive, likeable system, and we're looking forward to seeing how it integrates with Android TV and Sony's own user interface.

At a recent press event Sony also revealed it would be working hard to produce TVs compatible with High Dynamic Range (HDR) before the year is out. HDR was just one of a number of new TV technology buzzwords coming out of CES this year, and relates to the contrast between how bright and dark a TV picture can go. Note, you'll need compatible hardware and software to experience HDR.