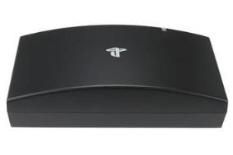 It's cheap, it adds another dimension to your PS3's spec, and in the most basic terms it's competent enough. But we're not sure we'd buy one

Are you a glass-half-full or a glass-half-empty kind of person? If it's the latter, chances are you'll be viewing Sony's PlayTV with thinly veiled contempt right now.

That's not merely because it looks so dull – and you've got to admit this prosaic little slab is no looker – but also because its final, finished spec seems nowhere near as advanced as was first hoped.

If on the other hand you're prepared to acknowledge that, yes, on occasion life is actually worth living, you might find yourself drawn to this comparatively cheap TV add-on for your PS3: it's easy to set up, delightful to use, performs respectably and, well, it turns your games console into a PVR. Which is novel, if nothing else.

But before we delve into the pros and cons in more detail, let's sum up the PlayTV proposition in brief. A compact twin-tuner adaptor that lets you watch and record TV on your PS3, it needs just two wires to install.

The first connects into your console via USB – drawing sufficient mains power to operate as it does so – while the second is a conventional RF socket linked to your TV aerial.

So far so simple, although using up a USB is a pain if you've a newer-generation two-USB console (owners of 60GB PS3s, which have four inputs, will be less bothered).

We'd also question the decision not to fit an RF output to the box, unlike most set-top-boxes and DVD recorders: it means you can't route your aerial's signals onwards to another device, such as your TV.

The on-screen menus are beautifully rendered, navigating through the EPG is straightforward (with either a SIXAXIS controller or Bluetooth remote as you prefer) and recording functionality is exactly as you'd expect.

You can watch one programme while recording another, and also play games while recording. Sony is at pains to forewarn against possible game slowdown when recording while gaming, but we successfully recorded TV and played Gran Turismo Prologue in 1080p at the same time with no visible deterioration in either case.

There's no way of adjusting recording duration to trade-off quality against length, though: you're stuck with fixed-bitrate encoding, which means using up roughly 1.5GB of your PS3's hard-disk space per hour of video.

That's not going to last you too long on a 40GB console – which is why, no doubt, the recently announced 160GB model recently made its debut.

Sounds great, but remember, applying this much scaling to a lower resolution video signal that isn't actually that good in the first place (say, a channel like Dave) can result in a blocky, noisy picture.

That's not necessarily Sony's fault, or an issue with PlayTV: that's just what digital TV looks like in this country. Roll on HD...

High definition is conspicuously absent
And on that subject: when first mooted, PS3 was supposed to offer high-definition viewing and recording capability. So what happened?

Initially, its delayed launch was supposed to take account of DVB-T2, the recently ratified broadcast specification that will enable free-to-air digital terrestrial television. But the finished PlayTV box sports DVB-T badges, with no mention of that all-important '2'.

Sony has murmured of a future downloadable upgrade to enable HD recording in the future, but whether that's technically possible is another thing altogether.

OK, so PlayTV doesn't have an HD-compatible tuner. So what? Well, if you're glass-half-empty man, that's reason enough to stone Sony in the streets, but hold on a second.

According to Ilse Howling, general manager for Freeview, "the earliest high-definition broadcasting will happen is late next year", as we've reported here.

Quite apart from the whole DVB-T2 issue, there won't be a simultaneous nationwide rollout of free-to-air HD broadcasting simply because the bandwidth to allow for Freeview HD in each broadcasting region depends on the analogue switch-off in the same region.

In other words, even if PlayTV DID record Freeview HD, if you lived in, say, Guildford, you'd still be stuffed until 2012 at the earliest.

PSP support is more complex than we'd like
Still got that stone in your hand? Well, on one other front, maybe we'll go along with you.

One of the original selling points of PlayTV was its support for easy transfer of video to your PSP: record last night, watch on the train on the way to work the following day.

Now, sadly, things aren't so simple. Using Remote Play, you can watch your recorded content on your PSP over wi-fi on – fine, so long as you're in a wi-fi hotspot – but a straightforward memory-stick transfer? Nope.

What you have to do is transfer recorded content from your PlayTV video library into your PS3's XMB video library, then convert it into PSP format using a freeware program like PSP Video 9. It's do-able, in other words, just not especially slick.

And that, in essence, sums up the PlayTV as a whole. It's not as bad as people have made it out to be: it's fun to use, perfectly competent in viewing and recording terms, and not that expensive. But it's also not quite what we were hoping for.