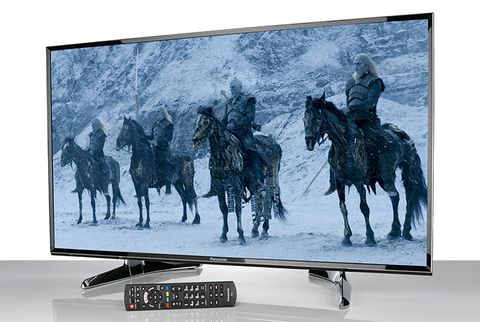 A 40-inch screen with Ultra HD 4K resolution that costs just £500? That sounds too good to be true. But the Panasonic Viera TX-40DX600B is real and it promises the latest picture technology wrapped up in a small package that doesn’t cost a small fortune.

But first, we have a couple of questions: is a 40in screen too small to fully appreciate the pixel-popping awesomeness of 4K? And does this TV strike the perfect balance between size, price and top tech?

The TV itself has a sturdy build, with a slim bezel surrounding the 40in screen, and shiny feet that stand rigidly on the surface. It’s not the slimmest TV, but it’s not too chunky, either. It’s the ideal size for fitting into the corner of a living room.

Around the back you’ll find three HDMI inputs, two of which are HDCP 2.2 certified – those are the ones that are compatible with 4K Blu-ray discs and players. It’ll also accept 4K HDR content, even if the panel itself doesn’t support HDR.

Component and composite inputs, an optical output and two USB ports round up the list of connections.

The remote control included is nothing fancy: it’s a standard remote that’s intuitive to use and works responsively with the TV’s menus.

4K and HDR have tended to come hand-in-hand with the top-end tellies of 2016, and likewise with the 4K Blu-ray discs trickling into the market now. A further question immediately pops into our minds: will the 4K discs look their best on a screen without HDR support?

We start with one of our favourite 4K Blu-ray discs, Mad Max: Fury Road. The Panasonic screen is filled with pin-sharp detail, with the gritty textures of the monstrous cars displayed clearly. It’s a wonderfully crisp picture without being overly sharp.

You can pick out the dirt and grime on people’s faces, the rusty metal, the grains of sand – there’s plenty of detail here.

Sit close to the screen and you won’t find much noise at all. It’s a very good picture. The fiery reds are scorching, while the blues make a cool contrast. It’s vibrant enough to be exciting, but doesn’t go over the edge into being oversaturated.

Panasonic strikes just the right colour balance, which is more apparent when you’re watching sitcoms like Brooklyn Nine-Nine, or old episodes of Top Gear in standard definition, which look pretty decent when upscaled to the 4K screen.

Blue skies, skin tones, office interiors and car paint all have a natural look to them, and there are no discernible motion issues when cars chase each other.

There is the expected dip in quality with the standard definition picture, which is fuzzy and not as detailed compared with the 4K Blu-ray, but it’s still watchable and, more importantly, enjoyable.

What stops us from completely loving the Panasonic TV is a matter of subtlety and contrast. A touch more low level detail would stop characters and objects from looking flat against the background at times.

We want more gradations of shading to make them look fully three-dimensional and realistic.

You can see a decent amount of detail in shadows, but the black and dark areas could go that bit deeper. The picture in general could be brighter, too. It feels like using a smartphone where the screen never reaches that perfect 100 per cent brightness.

Turning up the brightness level in the settings only makes the picture look faded; we want more punch and intensity to bright scenes without compromising the black depth.

The 4K version of Mad Max has the same problem, but the Blu-ray doesn’t. Could this be the lack of HDR support that limits the nuances of colour and contrast in the 4K picture?

Though you only really notice the level of clarity and detail in the 4K film once you’ve compared it with the Blu-ray (which upscales admirably on the 40in screen), there doesn’t feel like that much of a difference between the two. It’s not enough to make you go “wow” when you see 4K.

While you do get a step up in detail, clarity and sharpness, the screen’s small size and lack of HDR means you don’t get the full blast of just how gorgeous a 4K Blu-ray picture can be.

Blu-ray performance is better, and essentially, isn’t too far off the 4K. Here the Panasonic manages to strike that balance between contrast and brightness better, and ends up being a more satisfying watch.

Watching the Panasonic TX-40DX600B, it takes us a while to realise we aren’t immediately yearning for a soundbar. It’s a pleasantly full-bodied sound. Voices are solid and direct, and the overall presentation is warm and rather punchy.

A soundbar would open up the soundfield and deliver a clearer, subtler performance, but we’re still quite happy listening to the TV’s own speakers.

We’re big fans of Panasonic’s Firefox OS interface: colourful circular icons that you can ‘pin’ to the home screen. It’s simple and straightforward to use, and the brightly coloured design is neat and appealing.

When you first fire it up, you’ll see bubbles for live TV, apps, connected devices and Freeview Play appear on top of whatever you’re watching. Navigating your way around them is fast and easy, and it all works smoothly.

We like that the interface isn’t too intrusive. Launching apps such as Netflix takes mere seconds, while scrolling through the input list or programme guide goes without a hitch.

You can add more icons to the home screen by ‘pinning' your favourite or most used apps (such as Amazon Video, YouTube or BBC Sport), and then rearranging the order to however you want.

Simply press ‘option’ on the remote after selecting an app to pin, move or delete it.

The TV comes equipped with Freeview Play and Freetime, which lets you roll back the programme guide and catch up with a week’s worth of shows. It also puts all of UK’s catch-up TV apps in one place: BBC iPlayer, All 4, the ITV Hub and Demand 5 are all available on the 40DX600B.

You’ll need an internet connection for Freeview Play to work. Wired ethernet and built-in wi-fi are provided, and both methods are stable.

Not everyone can fit a large TV into their living room, so the Panasonic TX-40DX600B is ideal for those with limited space. Add to that 4K technology at an affordable price, and you have an incredibly appealing proposition.

There are 4K TVs from Finlux and Hisense available at this money, although neither quite matches this Panasonic, which despite some shortcomings, is worth considering.