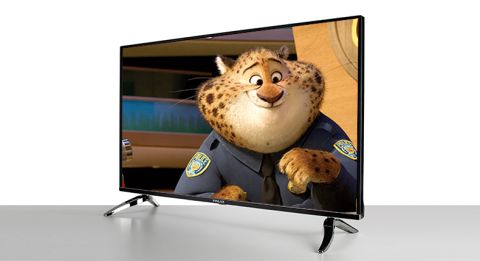 Another solid performer from Finlux, but the competition is tough

Finlux isn’t a brand you’re likely to see on the high street. Its business is primarily online, where it has carved out a solid reputation for good-to-great TVs at affordable prices.

The latest candidate to enter our test rooms is the Finlux 43UT3E310B-T, and it’s in the okay, rather than great, camp.

What you get is a well-equipped underdog that impresses, but doesn’t quite match up to its big-name rivals from Samsung, LG et al...

First impressions are positive. Build quality is good. You get a slim bezel and a lot of metal – close your eyes and your hands will tell you this thing is worth a lot more than it actually costs.

Sadly this touchy-feely luxury doesn’t extend to the remote, which is a tacky and unintuitive hunk of cheap-feeling plastic.

The specification list is impressive. It’s good news if you’re a fan of sockets: there are four HDMI 2.0 inputs and three USB ports, plus a VGA connection if you want to use this TV as a computer monitor.

It is increasingly rare to see 3D being promoted these days but Finlux is not giving up, offering passive 3D and eight pairs of glasses. Last but not least, this TV is capable of Ultra High Definition. That’s right, a 43in 4K TV for £500 (and we’ve seen it for as little as £400).

We get testing, and this Finlux fares rather well, for the most part. We begin with a 4K Netflix stream and we’re pleased to report it works.

We had a nagging fear that it wouldn’t, because many budget 4K TVs make big promises but don’t actually have the HEVC decoding necessary to stream 4K Netflix content. This Finlux, however, does exactly as it claims.

It looks clean and sharp, as you would want from a 4K screen. What you get is finely drawn without looking overly processed as you often get when some lesser rivals try to overcompensate. It’s clean, with little noise or unwanted artefacts.

Don’t expect colours that pop out and burn a big, fat exclamation mark into your retinas. This one is more laidback, with a balanced, natural palette. That’s nice, but there could be more subtlety to the gradation of colours.

And maybe it’s a little too laidback – we would like more impact from the picture.

Contrast is decent – there is enough to clearly delineate light and darkness. It’s not a particularly bright set, however, and it’s not great with shadow details, which get a bit lost. This issue is made more obvious as you step down to HD and then standard definition.

There’s the expected drop in crispness with each downwards step. The picture isn’t particularly arresting either way, but it still has a decent grasp of motion, and its sound is perfectly serviceable.

As for smart content, it’s a bit basic. Finlux’s interface is nowhere near as polished as those of its big-name rivals, and it’s not particularly snappy either. The app selection is the bare minimum: Netflix, YouTube and BBC iPlayer.

Nonetheless, the Finlux 43UT3E310B-T is a decent TV. You do get a reasonable return on your investment, particularly if you know where to look online. It does, however, face some strong competition.

See all our Finlux reviews