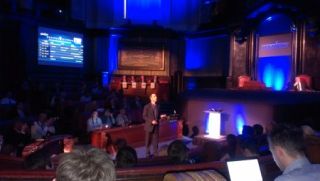 The long-awaited YouView platform was finally launched today, with the Humax DTR-T1000 unveiled as the first - and, currently, only - YouView set-top box.

We grabbed some hands-on time with the box, due on sale later this month for £299, this morning to see how the service looks and works.

You can read our YouView news story for all the details, but essentially the platform aims to seamlessly blend Freeview HD TV with on-demand content delivered over the internet.

The YouView EPG has the date above the programme list, allowing you to scroll forward up to 7 days and back up to 7 days, making it easy to find, click and watch content you might have missed.

If the programme is available from the broadcaster's catch-up TV service, then a play icon indicates you can click through to play it via the relevant service.

BBC iPlayer, ITV Player, 4OD and 5 On Demand are all present and correct on the platform in the 'Players' section. Launch ISP providers BT and TalkTalk will also offer their own extra content to their own customers who buy a YouView box. The ISPs also plan to offer bundled deals for their customers to make YouView more enticing and ultimately more affordable.

As well as this catch-up content, there is also access to a much deeper archive of content, with entire seasons of certain shows also available to watch on-demand.

Full seasons of shows such as Black Books and Four in a Bed were shown in the demonstration. The inclusion of such content is at the discretion of the broadcaster but naturally it's in YouView's interests to make the content offering as strong as possible, so this sounds like being a neat little feature.

The search functionality of the interface seemed to work very nicely, searching across all available on-demand content via a tab at the bottom of the screen.

It is a shame that it only searches through on-demand content however and not through live or future programmes. A YouView spokesman said this was something that they were working on for a future update.

All other areas of the YouView are accessible via this pop-up bar at the bottom of the screen, too.

On-demand movies are available from Sky's content offering, Now TV, and there was also talk of integrating the likes of LoveFilm and Netflix in the future. In fact, some 300 content providers were said to be interested in the platform, so while we don't expect to see that many options any time soon, we're hopeful the content offering could be bolstered in the coming weeks and months.

It's of course a PVR, too, with twin tuners and a 500GB hard disk drive on this Humax DTR-T1000 box. Further models are promised, with Humax telling us that a 1TB capacity box is imminent. YouView also promised a non-PVR model, which should be noticeably cheaper, in the not too distant future.

There certainly didn't seem much wrong with the interface and the way the service integrated, while the box looks smart enough and has a decent spec. But will the cost prove prohibitive for the target audience?

Alan Sugar, CEO of YouView, was predictably bullish: "Our target audience is anyone who has Freeview. Anyone who doesn't want to be tied in to a subscription service. This is the only box you need." It will be interesting to see if he's right...