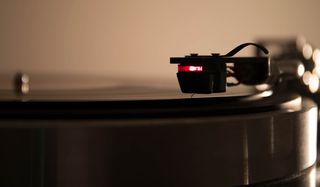 The DS-W1 cartridge uses a beam of light, much like you'd see on a digital optical cable, to detect the vibrations from the stylus.

This friction affects the movement of the stylus and disturbs the precise vibrations from the record groove. The optical design aims to eliminate this issue.

And DS Audio knows a thing or two about optical signals, being part of the Digital Stream Corporation (DSC) that co-developed, with Microsoft, the optical computer mouse.

Further design tweaks have led to the DS-W1, which is now set for a worldwide release.

The DS-W1 uses a boron cantilever and Shibata stylus housed in an aluminium body, and weighs just 6.5 grams.

The cartridge comes with its own phono amp and can be installed on almost any tonearm. Though it would probably be a little over-the-top on the average budget turntable.

In reality, you'll of course need to have a seriously high-end turntable to consider such an outlay.

The DS-W1 optical phono cartridge (and phono stage) is due on sale in the UK priced at £6250.