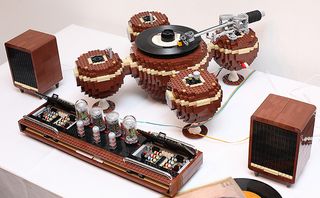 The lego turntable was on show at the Seoul Brick Pop Art Exhibition, which was dedicated to fantastical lego designs, and was made by a chap called Hayarobi, no stranger to lego creations.

The record player is built entirely from lego bricks and accessories, even the tonearm, except for the sole addition of an Audio-Technica 1Ea cartridge.

And it all works, as you can see in the video below.

Named 'The Planet' (after the Rega Planet, maybe?), the record player contains some 2,405 pieces, including a Lego Power Functions Battery Box and M-Motor.

There's a lego on/off power button, a lego switch for playing both 33 and 45rpm vinyl records and an ingenious use of lego tyres for the tonearm's counterbalance.

What's more, Hayarobi also went to the trouble of making a lego valve amplifer design and lego casing for a pair of speakers.

These may not be fully functioning like the deck, but they sure look pretty smart.

You can see more pictures of the lego valve amp on Hayarobi's Brickinside user page.

Sadly, we don't think this one will be coming in for review any time soon...