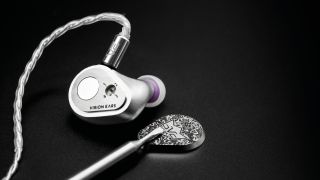 It’s hard for products as small as in-ear headphones to build much perceived value, but Cologne-based Vision Ears has given it a good go with its £4199 Erlkönig (‘Elf King’ in English, in case you were wondering) buds.

For one, the shell of the hand-crafted in-ears is made out of silver and has four interchangeable faceplates. They also come supplied with both wooden and leather cases for when they’re not in your ears.

Under all that external elegance is a not-too-shabby 13 drivers - four for bass, four for midrange, four for treble and a ‘super’ tweeter. We know what you’re thinking: how do they fit them all in there?

Those umpteen drivers are served by a five-way crossover, and on each earpiece is a four-position adjustment that enables four listening modes.

11 of the world’s most expensive pairs of headphones