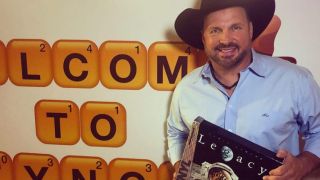 If tomorrow never comes, Garth Brooks will always know he did right by holding out on music streaming.

With pre-orders of his vinyl box set Legacy Collection selling all day long – and now surpassing a million units – Brooks looks set to have the biggest-selling vinyl record since the format made its resurgence at the start of the century. With the 7-LP box set retailing at $130, that's some $18.5 million in vinyl revenues heading his way.

You don't need friends in low places to know that for artists, direct sales of vinyl, as Brooks has opted for here, pays better than streaming, with fans and collectors willing to pay extra for the tactile, analogue experience.

Vinyl has of course been staging a significant comeback for the last 15 years, and Garth's resolution to go against the grain and not sign-up for streaming platforms looks to have paid dividends. With zero unanswered prayers, we sure hope Mr. Brooks ain't goin' down 'til the sun comes up. (OK, we'll stop now.)

Not just eschewing streaming and opting for vinyl, Brooks has also been taking matters into his own hands, selling the release himself online, pushed by a series of hosted videos and brand partnerships.

The personal touch didn't end there. As reported on Digital Music News, fans who bought one of the first 123,199 copies of Legacy Collection, had the option of engraving a personal, six-digit number on the side, with Brooks himself opting for his daughter's birthday and his wedding anniversary. All told, it worked, and it's another impressive milestone for the vinyl format.

While Legacy Collection will do well to match Michael Jackson's Thriller, the all-time best-selling album across all formats, with more than 47 million certified sales, and may not reach the heights set by the biggest releases during vinyl's heyday, for a 2019 vinyl release, it's a pretty astonishing feat.

A history of the strangest vinyl records ever made