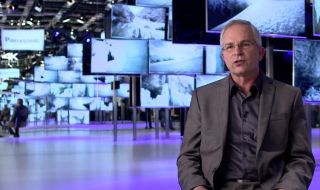 It's been a busy week for the Blu-ray Disc Association with some big news on the next (and probably last) Blu-ray disc format: Ultra HD Blu-ray.

The Ultra HD Blu-ray specification has been made official (and a logo released), while we also got some idea of the likely release date and prices for Ultra HD discs and players.

But can another disc format succeed? Naturally Ron Martin, one of the key players behind the format, thinks so.

Formerly VP of Universal Studios Hollywood, Martin is now VP of Panasonic's Hollywood Lab and has played a crucial role in the development and deployment of DVD, Blu-ray, 3D Blu-ray and now Ultra HD Blu-ray.

With Ultra HD Blu-ray, Martin is betting on the pull of the highest possible film quality, coupled with the added convenience of the format's new digital bridge feature, which brings UHD films to portable devices.

"This has been about a two year process to get to this point," Martin told What Hi-Fi?. "It's had a couple of redirections along the path. The original intent of the format was the digital bridge, which allowed a digital copy of the disc to be exported to personal devices so you don't have to go through the download process to get quality content.

"The Blu-ray Disc Association has always believed that the Blu-ray process in terms of a repeat, premium experience can't be beaten. Taking that high-quality master to portable devices was the main reason to get in to this."

And despite being a little late to the 4K party, Martin believes the superior quality of the Ultra HD Blu-ray format compared to streaming rivals, such as Amazon and Netflix 4K Ultra HD, will win people over.

"[A disc format] is the only repeatable, reliable way to do it. Streaming has certain advantages but many disadvantages," Martin said.

Better than streaming 4K? "Oh absolutely. It's about bitrate primarily - a disc and player is a totally robust system. The streaming mechanism is not just about bandwith for the end consumer but depends on reliability all the way along the path. It only takes one link to momentarily glitch for your experience to drop.

"Of course that will mature over time and continue to evolve like all of this does. But in the meantime the consumer is left with a substandard experience. Convenience sometimes trumps quality but very often you want quality in your home theatre experience.

"Blu-ray still promotes content ownership and collection, which a lot of people - remarkably - still enjoy. Young or old, people will migrate to quality."

Of course with Ultra HD Blu-ray, the BDA is hoping to add convenience to the quality. Enter the digital bridge system.

Essentially, this will allow you to make, legally, your own copies of your Ultra HD Blu-ray films. These can then be played on your TV - from an external hard disk drive, removing the need for you to search out the disc - and crucially also on tablets and smartphones.

Martin explains: "Ultimately, if i have a piece of media, I put it in my player and it will give me the option to make a copy of that disc on a local hard drive attached to the player. I don't have to reload media every time, I just go right to the hard drive and access the library.

"It's part of the Ultra HD Blu-ray specification. It will be optionally implemented but most manufacturers will embrace it. I will also be able to take that media and export it to a personal device, tablet, smartphone or whatever device is enabled, as a CMF (common media format) file."

Naturally, the issue of piracy looms large. "The difficult part is protection mechanisms but those are resolved now and ready to go. It wil have to be attached to the player to be loaded, there's a negotiated hand-off involving connecting to the internet and getting authorisation. The number of devices can be set by studios. There could be a fee associated, it could be part of the disc package."

Martin sees franchise films and collections being key to the uptake of the new format. But what does he say to people who think they've bought Star Wars on enough formats already?

"It brings up the whole HDR conversation. Digital cinema capture now contains a dynamic that never normally makes it to the viewer. Standard colour spaces that we have now, they are extremely limited. We're all used to it but part of HDR - which consists of a new signalling system and a new display - really breathes life in to older, and current films, in a remarkable way.

"Studios always try and build value in to re-releases - missing scenes, restoration - but here we have a value that is on the emerging edge of all this, that actually shows you what the cinematographer was looking at when he looked through the viewfinder, this has never been achieved before.

"Sometimes that's stunning. It really looks like a window on the film. it's a compelling way to re-tell old stories and enjoy them in a much more immersive experience. Some of your favourite films, that have been rescanned at 8K, mastered in 4K and include HDR, are absolutely like seeing films for the first time. Most films are captured in resolution that HD doesn't do justice. The colours, the highlights, the detail, is quite remarkable."

And are films actually being made in 4K?

"Right now, most high-end, high-budget films, probably 30/40 per cent, if not more, are captured in 4K. That's constantly changing. Visual effects in 4K are quite expensive but that is dropping quicker than we thought. And it's better to capture in 4K for the archival process."

With all the talk around picture performance, what can we expect from audio? Martin suggests that thanks to the emergence of Dolby Atmos and DTS:X, the leap in quality has already been made.

"Atmos and DTS:X are supported, as on the current Blu-ray standard. In that sense there's a level of maturity that didn't need to be worked on. Now we're adding the video dynamic."

There was a lot of talk about 3D being marginalised, and certainly it seems 3D is an after-thought for Ultra HD Blu-ray - though it will be an available option on 4K discs.

"3D is included as part of legacy playback. Most studios have pretty much agreed 3D is going to be primarily a cinema experience or an HD [not Ultra HD] experience in the home. 4K 3D both cinematically and in terms of home videos isn't on the horizon right now."

MORE: DTS:X - everything you need to know

With Ultra HD Blu-ray players set to cost two to three times that of Blu-ray players, there's a considerable upfront fee for those looking to buy in to the new format.

But what about early-adopters who bought early spec 4K TVs? Martin was keen to stress that it was the BDA's aim that no consumers would be left behind.

"4K TVs won't need the HEVC codec. The HDMI connection will negotiate with the TV and see what it's capable of: if it's 4K capable it will get 4K/24p, if it's 60p material it will convert, if it's HDR it will convert to SDR. At no point do we want to leave consumers hanging, you'll never get a blue screen saying, 'Sorry, you're locked out'."

But for the full fat Ultra HD experience, you'll need a TV capable of displaying HDR content. And Martin is convinced you'll want one, naturally: "By the end of the year we will see the first versions of HDR displays. I've seen prototypes and it's just 'wow' compared to what we've been seeing."

And will Ultra HD Blu-ray be the last disc format we see? Even Martin is prepared to concede that's almost certainly the case... but never say never.

"As of today, yes. We'll see how mature digital distribution networks become. You could probably say the same about the next-gen of terrestrial broadcasts. We think this will be the last iteration of this but we're certainly open to discussion."

"The evolution of the imaging process will always move forward. No-one is quite sure if 8K will be a consumer format. Certain venues, like iMax, 8K has an immediate pay-off visually.

"We don't want to close any doors. We're going to watch 8K very closely. The industry will continue to evolve and constantly surprise us. We'll see what happens."