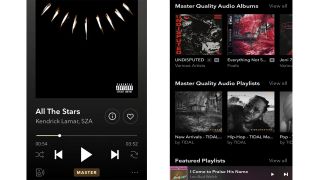 Two years ago, Tidal launched Tidal Masters: hi-res MQA streams, available at no extra cost to subscribers of its £20 per month HiFi package. It was first made available through Tidal's desktop app, and then through direct hardware integration on select MQA-ready products (such as the Bluesound Node 2 streamer).

In January this year during CES 2019, Tidal announced Masters support for the Android app. And now, Tidal has finally expanded Masters compatibility to the iOS app. It's good news for owners of Apple devices running iOS 11 or later, who subscribe to Tidal HiFi, then.

Like the Android app, the iOS app can complete the first 'unfold' of MQA file decoding, outputting streams to a maximum of 24-bit/96kHz. The only way to entirely unpackage an MQA file for playback, and therefore give you a more accurate representation of the file based on your system characteristics, is by pairing your Apple device with an MQA-compatible DAC, taking the decoding process away from the software (iOS Tidal app).

Apple owners will be able to benefit from the app's 96kHz (or below) output using compatible Lightning connector headphones or by connecting their Apple device to an external DAC, however the output restrictions of the Lightning-to-3.5mm adapter is limited to 48kHz.

We can confirm that the Tidal iOS can be updated now to show Masters tracks and albums.