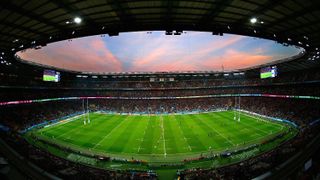 This year's Rugby World Cup in Japan will be broadcast in 8K, the tournament's organisers have announced.

Japanese broadcaster NHK will offer up the 8K footage, but only to its domestic audience. Everyone outside Japan will have to make do with 4K, where available. That's hardly a hardship, seeing as 8K TVs aren't on sale in most countries yet. (And those that are don't exactly come cheap.)

8K content has 16 times the resolution of high definition. NHK currently shows two 8K channels in Japan. Apart from that and some YouTube videos, 8K content is limited to demo videos showing the format's potential.

RWC, the tournament's organisers, will offer coverage through multiple feeds in multiple formats, allowing broadcasters in each country to tailor it as they see fit.

The coverage will also incorporate augmented reality (AR) graphics in 34 out of the 48 matches. That means virtual elements will be overlaid onto the footage for segments like team line-ups, player comparisons, statistics and tables.

Readers in the UK who have watched Match of the Day recently will know what to expect. Hawk-Eye Smart Replay tech will also be on hand to help refs with close calls.

According to the organisers, the tournament will set a new benchmark for sports broadcasting.

“Our mission is to grow the global rugby family and our Rugby World Cup 2019 broadcast plans reflect that mission – providing more content to more people with more innovation than ever before," said World Rugby chairman Sir Bill Beaumont.

No fewer than 34 broadcast cameras will cover all angles for the final and semi-final. We're also promised a comprehensive social media package, producing four times as much content as during the last Rugby World Cup in 2015.

The tournament kicks off on 20th September, with hosts Japan taking on Russia.

8K TV: the good, the bad, and why it's coming sooner than you think