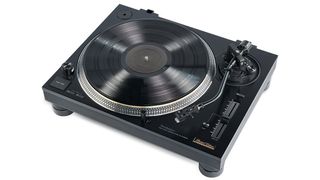 Technics celebrated its 55th anniversary with the launch of an all-black, limited edition, Technics SL-1210GAE turntable. Only 1000 units were made available and, surprise surprise, they sold out pretty quick.

Based on the SL-1200G, and following in the footsteps of the limited edition SL-1200GAE from 2016, the new SL-1210GAE has a 10mm-thick aluminium top panel complete with an anodized black brushed finish. The buttons and tonearm also have the same all-black finish for a striking design.

The SL-1210GAE is made in Japan and has the top panel inscription to prove it, with each deck marked with a unique serial number to signify it's a 55th anniversary edition.

This special edition turntable borrows technology from the flagship SL-1000R, too, with a specially developed zinc insulator, which features a soft gel-like material called aGEL, that aims to further isolate the turntable from external vibrations.

Tokyo-based Nagaoka is this year celebrating 80 years of producing cartridges and turntable accessories, so seems a fitting partner for a Technics anniversary turntable. The SL-1210GAE is supplied with a JT-1210 moving magnet cartridge that was specifically tuned by a joint team of engineers from Technics and Nagaoka.

The JT-1210 employs a Boron cantilever and is designed to deliver superior "focus and detail", and will only be available with the SL-1210GAE.

And, proving that it's sometimes the little things, Technics has also included the ability to turn the strobe light off and included the case that was missing on the SL-1210MK7.

Elsewhere, the SL-1210GAE shares the same properties of the SL-1200G, from the 'coreless' direct drive motor, which works with high-precision rotary positioning sensors to help reduce any unwanted interference, to the four-layered cabinet construction, which includes a 10mm thick aluminium top panel.

The platter itself is a three-layered construction, with the a gleaming brass-top plate, heavyweight aluminium die cast core platter and a solid rubber coating covering its entire rear surface. All in the name of rigidity and vibration damping.

Elsewhere there's the high-precision motor control based on tech from the company's Blu-ray players, which aims to keep rotation stable, as well as a lightweight magnesium tonearm and of course high-quality terminals.