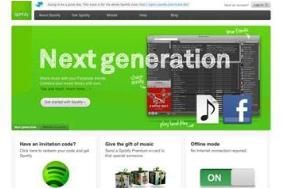 In a move towards social networking, it's aiming to let users swap and share music tracks as well as allowing them to check out what their friends are listening to.

Spotify CEO Daniel Ek says the company's engineers have been working on the update for the last six months.

On the new-look service users will be able to import their friends from Facebook and their iTunes songs.

An automatic update is being rolled out now and will be offered to all of Spotify's seven million European users over the next week or so.