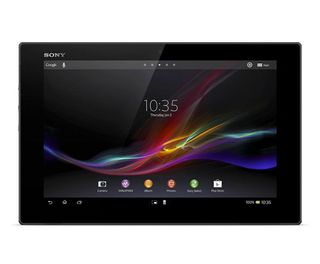 The Xperia Tablet Z has already been shown off in Japan, but was confirmed for a worldwide market, in what Sony described would be a “breakthrough year” for the company.

At 6.9mm thin, the 10.1-inch Xperia Tablet Z is the slimmest tablet in the world – for now at least – beating the iPad mini at 7.2mm, and even its smartphone sibling, the Xperia Z, which measures in at 7.9mm.

Sony has also said it’s the lightest tablet on the market too, weighing around 500g.

Powering the Tablet Z is a nippy quad-core 1.5GHz Snapdragon processor, with 32GB of internal storage and 2GB RAM.

It has an 8.1-megapixel camera, will support 4G and offers NFC technology for one-touch pairing with other devices.

Similar to other Sony mobile products of recent times, the Xperia Tablet Z will be waterproof and dustproof, so it’s made of tough stuff too.

The Xperia Tablet Z is due to launch in the UK at some point this Spring and is set to cost £399 for the 32GB WiFi only model or £499 for the 4G LTE model.