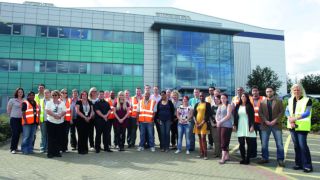 In 2011, the North London warehouse was famously damaged by a fire, which destroyed around 25 per cent of Britain’s total stock of home entertainment discs. Seven years after its re-opening, the Enfield distribution centre could be set to close for good.

Such closure would invariably be a repercussion of the ever-growing consumption of music and video streaming and subsequent decline of physical media – as Sony recognises.

While other European Sony DADC plants in Austria, Czech Republic and Spain will remain open, the news comes just 17 months after Sony passed the manufacturing of audio discs from its Indiana, US centre – the very first plant it opened in 1983, and from which Sony's first disc, Bruce Springsteen's 1984 Born In The U.S.A album, came – to rival disc manufacturer CDA, Inc.

In a statement released to What Hi-Fi?, Sony said: "As consumer habits in the home entertainment market continue to evolve, Sony DADC in England announced its proposal to close its distribution site in Enfield, England.

Sony DADC will continue to remain a strong and reliable end-to-end services provider and partner for the home entertainment industry and beyond by utilising the combination of its existing operations network in Austria, Czech Republic and Spain, plus partnerships with other providers."

How Spotify saved the music industry but left some genres behind