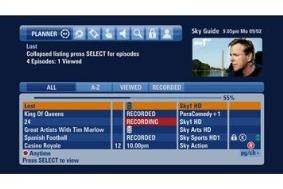 We first saw the new Sky+ HD EPG last June, when we had a hands-on preview, but its implementation – originally due last autumn – was delayed while further research was undertaken.

The new Sky+ HD Guide is designed to make it easier for HD customers to find, watch and record the programmes they want to watch live, on-demand via Sky's Anytime service or at a later date.

The first batch of Sky customers will get the update on March 10th, and it will then be rolled out across the rest of Sky's customer base during the next few weeks.

Gerry O'Sullivan, Sky's Director of Strategic Product Development, says: "The launch of our new on-screen guide means Sky+ HD customers will now find it even easier to search, record and watch the thousands of hours of high-definition programmes that only Sky+ HD delivers".

Benefits of the new Sky+ HD Guide include:

* New Mini TV: Viewers can now browse and watch TV at the same time so they never have to miss a minute of their favourite show again.

* Improved Now, Next and Later banner: Viewers can now view programme information for all programmes across all channels, up to 12 hours ahead without interrupting their current TV viewing.

* New Series Stack: The new Series Stack feature helps viewers better manage their recordings in their planner by grouping all the episodes from a series together in the same place under the programme name.

* Improved Search: Viewers will be able to search for their favourite shows and discover new ones up to seven days ahead by programme title, genre or subgenre, such as 'Movies: Comedy'.

To find out more about the new Sky+ HD EPG, check out our blog.