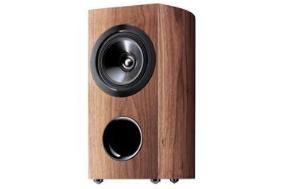 The S-81 and S-81C are available in high-gloss black and white ash veneer, while the S-81B-LR also comes in a real walnut veneer.

Pioneer formed an international team of acoustic engineers to create the Series 8 speakers, and based the designs on its EX Series.

The 2.5cm titanium tweeter is mounted in the centre of the midrange driver and all the speakers have been engineered to handle the high frequencies of high-definition audio formats such as SACD, DTS-HD Master Audio and Dolby TrueHD.

A solid cone structure, linear magnetic circuit and rigid aluminium basket frame are used for the 13cm, Aramid carbon composite woofer, and the all models have been designed using Pioneer's Phase Control technology.

Phase Control manages the time and phase response of the speakers to minimise the effect of additional sound delay, usually due to the filtering process of multichannel recordings.

All Series 8 speakers are available now.

For more on the launch of Pioneer's 2009 AV range at Air Studios, read Richard Melville's blog.