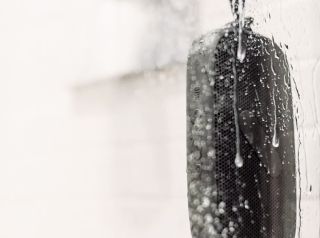 The "new-generation" American audio manufacturer had been looking to raise $75,000 (£45,000) for the Super M's initial production run, marking the next phase of NudeAudio's efforts to make "premium audio experiences accessible to everyone".

And not only has NudeAudio reached its fundraising target within the allotted time, it has actually raised an impressive $840,000 (£503,000) – more than 10 times the initial figure – as supporters flocked to make the new Bluetooth-enabled speaker a reality.

NudeAudio says it "pairs the freedom of a grab-and-go size speaker with the best possible sound on the market" – handy if you want to have your music with you, or listen to the football with the start of the new Premier League season tomorrow.

Its key features include four full-range Neodymium drivers; two passive subwoofers; and 360-degree sound, while Bluetooth 3.0 will let you stream music from compatible devices. There is also an eight-hour battery to power the Super M.

NudeAudio has designed the Super M to fit inside your back pocket, while making it tough enough to stand up to the rigours of water, sand and snow; housing components in a high-grade silicone sleeve for when you want to put the speaker to the test.

After the company hit its first "stretch target" of $500,000 (£300,000), supporters were invited to put forward suggestions for a "community colour" that will be among the finishes available when the Super M goes on sale.

The options were put to a vote and Black and Coral was the one that came out on top, to sit alongside the previously announced four colours and the Yelle Special Edition. A bike mount will also be available.

"NudeAudio’s anti-feature policy means we strip away all unnecessary features and focus our cost on the essence of the product. We want to put all the money into the acoustics,” says chief design officer Peter Riering-Czekalla.