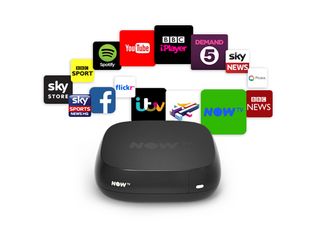 We’re used to seeing devices get incremental tweaks, but the Now TV box has just undergone a complete overhaul.

There’s also an ethernet port, which means it’s no longer limited to wi-fi connections. That will be good for those with dodgy broadband.

Other additions include a USB port which allows you play your own stuff (H.246 MP4 and MKV, AAC, MP3, JPG and PNG), while a microSD card slot lets you expand storage space for apps.

The new Now TV box has all of the UK’s main catch-up apps: BBC iPlayer, ITV Player, All 4 (former 4OD) and Demand 5. Subscription-based video seems limited to Now TV – hardly surprising seeing as this is Sky’s show, and Netflix and Amazon Instant Video are its chief rivals.

Sky hasn’t yet revealed what’s under the hood, but it has promised five times the processing speed of the original.

Despite the various additions, the box itself is similar to its predecessor. Sky have used a rebadged and simplified Roku device, using the Roku 2 and 3 boxes as a template. It's a welcome move, considering how much we enjoy the Roku 3.

The Now TV app is a video streaming subscription service with a twist, allowing you to get Sky content without installing a satelite dish. You can buy monthly or daily passes to Movies, Entertainment (mostly TV shows) and Sport.

Tempted? The Now TV (2015) box is available for £15. You can also get it in bundles: £25 gets you a box, plus a two-month Movies Pass, a three-month Entertainment Pass, or a two-day Sports Pass.

We have one in the building, so expect a full review shortly.