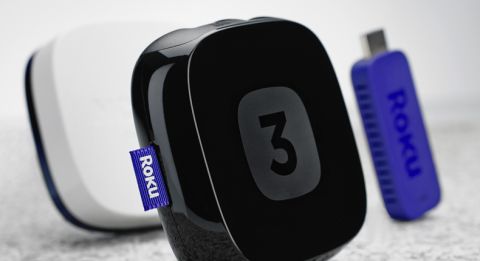 If Darth Vader had a hockey puck, it might be a little like the Roku 3. It’s a tiny device that does a lot more than its appearance suggests.

Roku has made several streaming devices, but this is easily the best one we’ve seen. For starters, it is seriously fast. Whatever command you enter, the Roku 3 will comply with full thrusters.

We manage to wake the device, load up Netflix and start playing something in the time it took for the Roku Streaming Stick to merely wake up. If you have little patience and want your content right now, this will bring a smile to your face.

The performance is good. Videos load to 100 per cent and Full HD 1080p with little buffering. You can also pass through Dolby Digital 7.1 surround sound if you have an appropriate set-up.

It’s a very simple device in terms of hardware: there’s no power button, because it uses less than 3.5W in standby mode (less than a typical nightlight). It also means the device can update its own firmware when you’re not around. The only sign of life is a tiny white LED in the corner.

There is a surprising number of connections, considering the size of the Roku 3 – an ethernet socket makes us happy; wi-fi is handy, but hard-wiring will ensure a more secure connection.

A microSD card slot lets you expand the device’s storage, in case you download too many apps and games. A USB port lets you play your own files. File compatibility could be better (MP4, MKV, AAC, MP3, JPG, PNG) but apps such as ‘Plex’ let you stream your own content from a networked computer.

Video output is via HDMI. If you have an older TV with only analogue connections, you’ll have to look at another streamer in Roku’s range. The remote control is worth mentioning: it doesn’t need to be in a line of sight with the Roku 3 to work, so you can tuck the box away.

More impressive, though, is the ‘Private Listening’ feature. Plug a pair of headphones into the remote and the TV will mute, transferring its sound to the remote. Sound quality won’t amaze you, but it’s better than turning the sound down and switching on subtitles (don’t bother with the bundled buds, though).

The remote control also doubles up as a games controller, with extra buttons and motion sensors for simple games.

On to content, and Roku has a good offering: all the big names, Netflix, Now TV, YouTube and Spotify, as well as the UK’s four catch-up services. There are more, but they are very niche offerings.

Oh, and one final bonus. The Roku 3 allows basic casting – you can use your phone to send Netflix and YouTube videos to the TV. It’s not quite the Google Chromecast’s library, but it works well.

MORE: How to watch catch-up and on-demand TV

We are very happy with the Roku 3. It is pricey compared with rivals, but its list of features is impressive, and leaves the similarly priced Apple TV far behind.

Factor in the super-slick operational speeds and Roku is on to a winner.