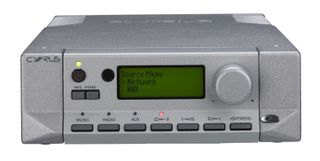 It's a triumphant return from Cambridge Audio in the streamer category, while there's a debut for new brand Bluesound and two superb choices from Cyrus getting our seal of approval. If you’re looking to transform your current set-up by introducing streaming to your system, read on for the best music streamers to buy in 2014.

The entry-level streaming category has found a new star in the Bluesound Node. As the most affordable component of the company’s excellent multi-room system, it’s no wonder it caught our eye in its own right when in our testing rooms.

Capable of playing back files up to 24-bit/192kHz, plus providing built-in support for the most popular streaming services, there’s next to nothing this box can’t stream. And it does so with a rich and full-bodied character, which is well balanced and full of enthusiasm.

This is the case no matter what resolution music you throw at it. Of course, high-res content offers more transparency and detail, but the Node’s fun, entertaining way with music doesn’t change when you drop down to a 320kbps stream from Spotify, for example.

In fact, it’s hard not to be entertained by the Bluesound Node – it’s an endlessly entertaining box of tricks at a superb price.

Taking things up a notch or two on the price scale and you'll find the Cyrus Stream Xa, which packs a 32-bit DAC alongside its streaming capabilities. That places it somewhere between the preamp-packing Stream XP2 and the X Signature network player in Cyrus’s streaming line-up

It’s as Cyrus as they come in looks and design, and carries the Cyrus family sound too - offering a lively and engaging sound, with class-leading levels of detail and precision.

There’s a likeable liveliness to its character, one that hooks you in and keeps you listening, album after album. There’s no doubt that paying more than £1000 for a streamer is a serious consideration, but one listen to this and you’ll hear where every penny is going.

As the old adage goes, if it ain’t broke, don’t fix it, and seeing the Cyrus Stream XP2-Qx take our priciest streamer Award for the third year running would certainly suggest that to be true.

Cyrus’s flagship streamer and pre-amp is a powerhouse of high-tech specifications, with its top-of-the-range 24-bit/192kHz Qx DAC module on board supported by a superbly specified power supply and internal circuitry.

At this price, the XP2-Qx needs to prove its worth - and it does so without hesitation, immediately demonstrating its superior rhythmic ability, with a fast, agile character that never loses its footing or sounds unsure of itself.

For a set-up where sound quality is king and budget isn’t a consideration, we can’t recommend the Cyrus XP2-Qx enough.

Sitting somewhere in the middle of all of these is this year's streaming Product of the Year, the Cambridge Audio Stream Magic 6 V2.

After a successful few years for the first version of this streamer, Cambridge Audio has now released an update, introducing new functionality that makes it better than ever.

While a lot of things remain the same, in terms of its design and sonic character, native 24-bit/192kHz playback is now capable over wi-fi as well as via USB thanks to a more powerful streaming module, and a lot of work has been done to improve and simplify the user interface and control apps, to great effect.

This new processor architecture also means browsing menus is much faster than it was on its predecessor, plus Spotify Connect has now been added to make the Cambridge Audio Stream Magic 6 V2 more flexible and versatile than ever. A fully deserving Product of the Year.