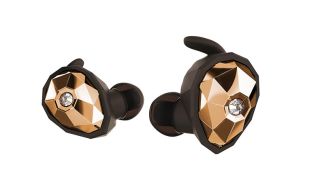 Completely wireless earbuds (ones without adjoining wires) are all the rage, and Monster has jumped on the bandwagon with its first two models: the Elements in-ears (part of a wider wireless Elements family), and an iSport model that builds on the brand’s existing sporty range.

Both use Monster’s new AirLink technology, which allows for a ‘truly wireless’ experience. Instead of wires connecting the buds, they feature a proprietary Y-shaped inner antenna that ensures a reliable signal between the two. Two drivers inside each also claim to deliver ‘perfectly balanced’ sound quality.

The jewel-inspired rose gold-finished Elements (above) will be presented in a velveteen charging case, which gives the buds enough juice for 2.5 hours playback at a time, and offers 21 hours of charge before needing plugging in itself.

The Elements are due to launch in April, priced $300, while the iSports are due ‘later this year’.

The new Elements family also includes on-ear and over-ear (above) models, which also come in a rose gold finish, as well as black slate. Like most wireless models, the Elements’ can be wired to your music source via a 3.5mm jack, but also digitally through a USB-typeB connection. Both offer 24 hours playback, ‘club’ and ‘natural’ sound modes, on-ear swipe controls and a portable folding design.

All three new Clarity models, due in April, are equipped with “some of Monster’s most advanced audio engineering and technologies”. There’s a newly-designed microphone for “crystal clear calls”, while the Around Ear BTs feature Monster’s “best-in-class active noise cancellation technology”, which monitors external sound and responds with phase cancellation to reduce unwanted noise.

A new tapered ear cushion design aims to provide a light and comfortable experience – from our time with the wireless over-ears, we can confirm they’re lightweight. The closed-back range also features a foldable design for easy storage, four-way built-in button controls, and over 24 hours of playback.

Heading the expanded fleet is Monster’s flagship Battleship ($600, above). With a built-in propeller and waterproof design, the six-driver speaker is designed to float in and can be guided across your swimming pool using an app.

A kind of multi-room feature, ‘Big Party Mode’ lets you wirelessly stream to all Blaster speakers, while a ‘Juke Box’ mode lets you queue your favorite songs. It has a claimed battery life of 25 hours before needing recharging.

There’s also a Ravebox ($500) that features built-in LED lights that synchronise to your music, and offers the same bi-directional sound as the original Blaster thanks to a V-shaped cabinet with drivers on both sides. It also features Monster’s proprietary PowerBass, subwoofer for “full and deep bass,” and promises 12 hours battery life.

The giant flashlight-looking Nitro ($350) and Dynamite ($250) models also feature six-speaker configurations and omni-directional sound thanks to Monster’s V-sound technology. The latter is also waterproof, plays music for up to 20 hours on a single charge and lets you charge up to four smartphones or tablets simultaneously from its built-in Power Bank. The Nitro simply adds to the Dynamite’s talents with the ‘Big Party Mode’ featured in the Battleship model, and also features Pure Monster Digital Hi-Resolution processing.

At the end of the Bluetooth speaker convoy is the Firecracker ($150), a more modest torch-like model featuring dual full-range drivers and a bass radiator, 25 hours battery life, USB smartphone charging, a microphone for calls and a seven-hour flashlight.