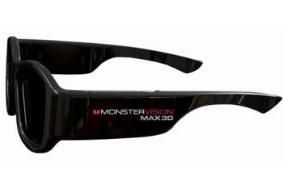 Monster has confirmed that its new universal 3D glasses, which it claims will work with any brand of 3D TV, will go on sale in the UK from late September.

They're designed to fit all head sizes and can be worn over prescription glasses. Full technical details are outlined in our original story below.

Monster has shown its first universal 3D glasses, designed to work with any active-shutter 3D TV.

The Monstervision Max 3D glasses will arrive in US shops in August, and will come complete with their own 2.4GHz radio-frequency transmitter, which the company says gives more reliable operation than the infrared system currently used by the TV companies.

Launched at an event in New York, the glasses are powered by lithium polymer rechargeable batteries , and are designed to be large enough to be worn over existing prescription glasses.

In-house active sync software is used in both the transmitter and the glasses' built-in receiver, and this is designed to avoid loss of synchronisation or pairing failures. That pairing also allows the glasses to work even in environments where another TV is being used with different 3D glasses.

In addition, the glasses can be updated with new firmware should any changes in 3D standards require, using a USB connection.

A starter bundle of a transmitter and a pair of glasses will sell for $250, with extra glasses $170 a pair.

The company expects more models will join the range, with company founder Noel Lee saying that an expanded line-up featuring designs from 'some of the most famous designers in the eyewear industry' will be on sale later this year.